Indian sand artist wishes Virushka in his own special way 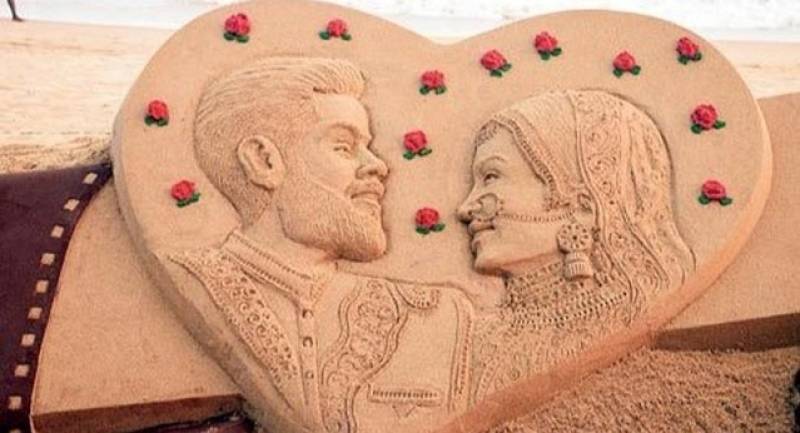 BHUBANESWAR - A renowned sand artist from India recently created a sand sculpture as a wedding gift for newly-married couple Virat Kohli and Anushka Sharma featuring the two as bride and groom.

Sudarsan Pattnaik created the sculpture dedicated to India’s cricket captain and the Bollywood actress that depicts their professions with a film reel around a bat, in the sands of Puri beach, Odisha.

Like most of Pattnaik's sand arts, this one too gives a 3D effect.

The artist also drew images of Kohli and Anushka in a heart-shaped structure with roses. He posted the images of his sand art on Twitter and tagged the two, with the caption, “Wedding gift for @imVkohli & @AnushkaSharma through my SandArt at Puri beach in Odisha. Wishing both of you happy married life. #VirushkaWEDDING”

Wedding gift for @imVkohli & @AnushkaSharma through my SandArt at Puri beach in Odisha. Wishing both of you happy married life. #VirushkaWEDDING pic.twitter.com/gOExsMaM86

Anushka replied to the artist on Twitter, saying : "This is so beautiful . We are both grateful, thank you".

This is so beautiful . We are both grateful, thank you ?? https://t.co/6dvZz95Aar

‘Virushka’ got married in Tuscany, Italy earlier this week at the grand village resort of Borgo Finocchieto in a heavily guarded affair attended by close friends and family. The celebrated couple made the announcement via Twitter.

They are currently honeymooning in Rome, Italy and will then travel to South Africa where India are scheduled to play the Proteas in a Test series which will be followed by an ODI and T20I series.

They will throw wedding receptions in Delhi and Mumbai on December 21 and December 26 respectively.