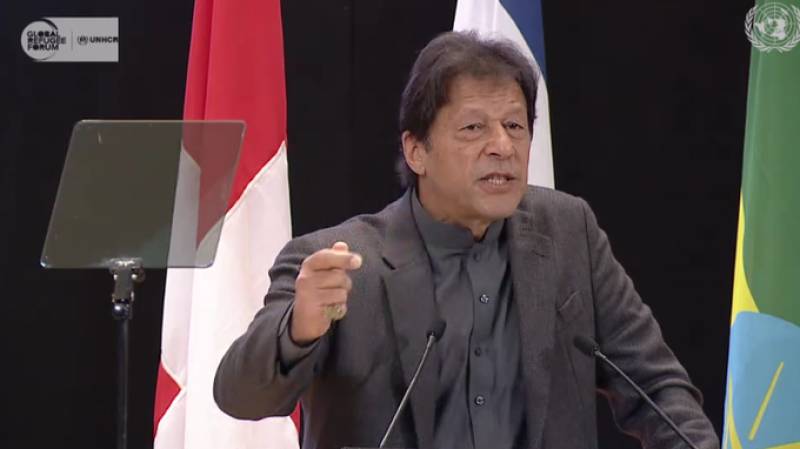 GENEVA  – Prime Minister Imran Khan Tuesday forewarned the world community about the possible consequences which might inflict the neighbouring countries, especially Pakistan once the refugees’ crises started unfolding itself in the wake of illegal and unilateral steps taken by the Indian government in Occupied Jammu and Kashmir (IOJ&K) and in Assam.

Addressing the opening session of the First Global Refugee Forum of the United Nations, the prime minister said that Pakistan had been through the biggest refugees crises in the history of mankind.

Pakistan had hosted about 4.5 million Afghan refugees and still it had a total of about 3 million refugees on its soil, he said, adding such a generosity was mainly inspired from the life lessons of the Holy Prophet (Peace be Upon Him).

The Global Refugee Forum – the first major meeting on refugees of the 21st century – was jointly hosted by UNHCR, the UN Refugee Agency and the Government of Switzerland.

The prime minster, who co-hosted the opening session, also underlined the issues which the countries like Pakistan, had to face in hosting a huge chunk of refugees and said the countries which had no resources with challenges to look after their population and meet their basic needs, had to spend funds on the human development, might be crippled with the refugees’ issue.

The prime minister said richer countries could not imagine the impacts of such crises, though the European countries for the first time, had started realizing it in the shape of migrants’ influx.

Pakistan, he said was facing the issue of massive unemployment and as prime minister, he knew that they had to face problems on daily basis as the people wanted jobs.

“I am very proud of my people, the way, they hosted the refugees and the hospitality they extended in the last forty years,” he observed.