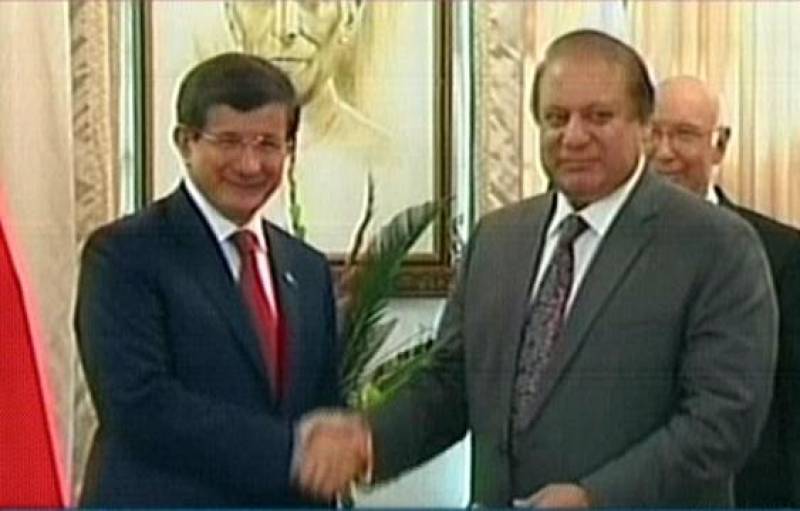 ISLAMABAD (Web Desk) – Pakistan and Turkey on Tuesday promised each other an enhanced cooperation, by raising the mutual trade to $3 billion.

Turkey has announced an additional assistance of $2 billion for Pakistan to speed up its fight against terrorism.

Addressing a joint press conference, Prime Minister Nawaz Sharif thanked the Turkish counterpart Ahmet Davutoglu on his maiden visit to Pakistan as the prime minister of a friendly country.

Pakistan and Turkey have been supporting each other for decades and this relationship will be strengthened further, said Sharif.

The Turkish prime minister said that whenever someone swore in as country head in Turkey he visited Pakistan. “Currently I am here on a short trip but I will be back soon,” he added.

Sharif praised the role of Turkey in maintenance of peace in Middle East. Both the premiers agreed to conduct a trilateral meeting of foreign ministers of Pakistan, Turkey and Afghanistan in March at the Turkish Capital of Ankara.

A number of treaties for trade among both the countries were also signed on the occasion.

Addressing the media after meeting the Turkish prime minister, Nawaz said, “Turkey has always stood by Pakistan in times of need.”

He said that security, defence and counter-terrorism cooperation remained robust between the two countries, adding, “We have no doubt, Pakistan and Turkey’s relations will continue to grow from strength to strength.”

Nawaz further said the two premiers met today in the backdrop of the Paris attack and its aftermath.

“We decided we will not allow any attempt to vilify Islam and justify sacrilegious cartoons in the name of freedom of expression.”

Speaking on the occasion, Turkish Prime Minister Ahmet Davutoglu said, “It is my absolute honour to have visited Pakistan in my first few months of leadership.” He announced $20 million aid for the internally displaced persons owing to the ongoing Operation Zarb-e-Azb.

Claiming Pakistan has always cooperated with Turkey in their time of need, he said, “Turkey will always be with you prime minister and the people of Pakistan.”

Turkey and Pakistan are much closer than neighbor but owing to our geographic locations we need to work on transportation linking us. This is why we want more frequency between Turkish Airlines and PIA and railway networks,” he said.

“We have signed 11 MoUs today,” he added, claiming the total number of agreements signed between the two countries is now 51.

“We support your initiative to have good neighbourly relations with India,” he further added.

Matters related to regional security and defence cooperation between the two countries were discussed. Prime Minister Davutoglu appreciated the success achieved by Pakistan in its fight against terrorism.