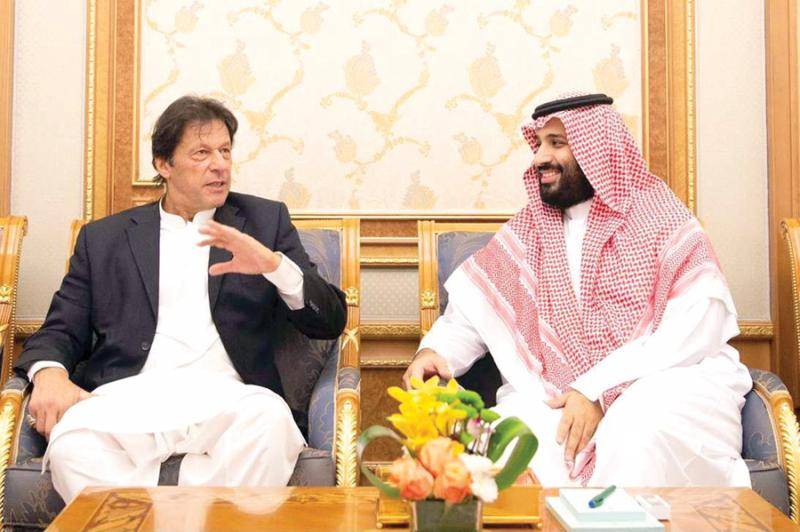 The relations between Pakistan and Saudi Arabia have survived the test of times. There were highs and relative lows amidst shifts in the global and regional balance of power. The multi-faceted ties become pretty single-track by the mid of 2000-era.

After a hiatus of about two decades, Islamabad and Riyadh are set to institutionalize the relationship in the context of One Belt One Road and Saudi Vision 2030. The crown prince, Mohammad bin Salman, lands in Islamabad today on the first leg of his Asia tour, which includes other populous nations like China, India and Indonesia.

As for Pakistan, the visit is exceptionally different from his last one in 2016. The kingdom eyes upscaling existing economic, societal and geopolitical cooperation. The most significant development is the summit-level oversight of the Memorandums of Understanding and agreements signed during the visit and prior by Saudi-Pakistan Supreme Coordination Council. The setting up of the forum signifies new-found synergy between Crown Prince Mohammad bin Salman and Prime Minister Imran Khan. Riyadh is not just helping Islamabad relieve economic pressure but also seeking her to become a bridge between its most important trading partner, China.

The armchair analysts are mistaken to view every Saudi move from the prism of containing Iran. Notwithstanding the bitter rivalry forcing her to launch a full-scale allied armed campaign against Houthis militants in Yemen, Riyadh has not taken its eyes off the plan to diversify its economy from petrochemical exports without compromising the growth rate. Alongside, the National Transformation Plan (NTP) is an exercise in extending a new social contract based on liberalized state-society relationship, by reforming the laws and modernizing the government structure.

The people have been responding with equal vigour. Who would have thought two years ago that ‘lousy Saudis’ will start showing up at one’s door as captains for ride-sharing Apps like Careem and Uber, and their women will take over the retail counters in the malls! There are, and will still be, slips between the cup and the lips. The kingdom originally aimed to swiftly lessen its traditional dependence on petrochemicals by 2020 which does not seem viable given the current economic data.

The kingdom’s process of transitioning to a new (and more normal) economic model requires support from external partners. The myth of Saudi Arabia’s sole reliance on the west for strategic partnership and military hardware has been broken as unprecedented cooperation with China including the transfer of military technology continues. Being one of the largest Muslim countries and in close proximity to the Gulf and the geographical border with China and Central Asia, Pakistan emerges prominently in its geopolitical and geo-economics ambitions.

Prince Mohammad bin Salman first expressed the desire of complementing the OBOR regionally and globally during his visit as deputy crown prince to China and Pakistan in 2016. Thus, the visit to Islamabad will set the tone for the heir apparent’s China sojourn.

There can be no better times for Islamabad to seek a free-trade agreement (FTA) with Saudi Arabia while seeking observer status in the Gulf Cooperation Council which India already maintains. Both initiatives can eventually pave the way for an FTA with the GCC once the Qatar-quartet row is settled.

Pakistan will lose the opportunities knocking on its door in Saudi Arabia as well as the GCC if the government fails to invest in training its manpower. The days for unskilled and semi-skilled labor force exports are over. Amongst other factors in the post-9/11 world, trained and skilled human resources graduating from India educational institutions has replaced their Pakistani competitors. With or without Saudi investment in skill-development institutes, Islamabad must prioritize to avert the decline in foreign remittances as well as staying relevant for the Saudi economy.

Over the past two decades, Pakistan’s exports have dwindled across the board. Not only it is due to the competitiveness of the markets but also lack of modernization of the Pakistani industry and facilitation by the government. One of the reasons behind India’s increasing leverage in the Gulf countries is its trade partnership instead of a quest of financial relief packages.

The concert between Imran Khan and Prince Mohammad bin Salman will be mutually beneficial if the two sides have a frank and honest dialogue with realistic yet ambitious goals. Besides, the bilateral relationship must remain unimpeded by external pressure groups for it neither was for a particular ideology nor against any.

The Saudi approach has been distinct for both Pakistan and India. Riyadh sees Jammu and Kashmir as a disputed territory which must be resolved by talks instead of the use of force. With Delhi, the kingdom does not maintain strategic or military ties while the close collaboration with Islamabad dates back to over six decades.

Though Indo-Saudi relations are purely based on economic cooperation, Crown Prince Mohammad bin Salman’s presence in the region presents him with an opportunity as a peacemaker. During his parleys with Narendra Modi days after the Kupwara attack, the Saudi top dignitary can act as a bridge-builder between the two nuclear-armed rivals. Peace diplomacy is best conducted away from the limelight of media.

Washington has already taken a partisan stance while Delhi views Beijing as a rival against whose consulate in Karachi its intelligence agency allegedly plotted an armed attack. Imran Khan must benefit from his Saudi guest’s good offices to seek greater self-reflection from India.  The stakes of the Gulf countries in normalization between Pakistan and India can’t be emphasized enough.