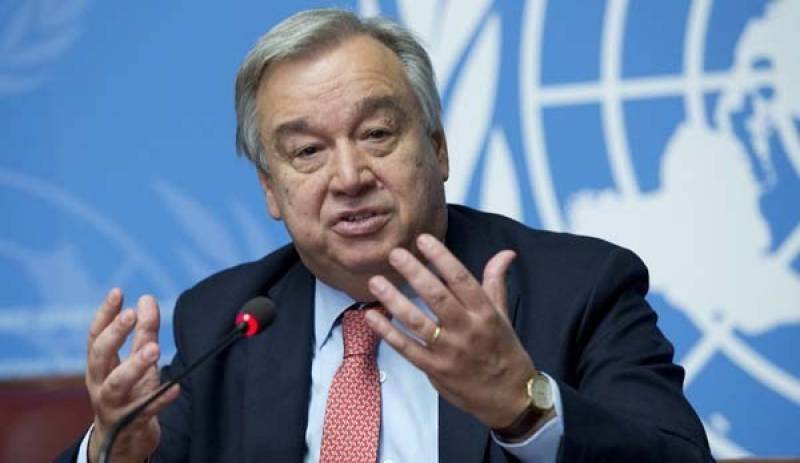 ISLAMABAD - United Nations Secretary-General Antonio Guterres Monday urged the peacekeeping countries to take cohesive actions in order to tackle the modern-day challenges to the peacekeeping missions around the world.

Addressing a seminar on peacekeeping held by Center for International Peace and Stability of National University of Science and Technology (NUST), the secretary-general said Pakistan had been one of the most consistent and reliable contributors to peace efforts around the world.

The secretary-general started his address with a moment of silence, also joined by the gathering, to pay tribute to the sacrifices of 157 peacekeepers who had lost their lives during peace efforts.

He said in rising threats to peacekeepers and the trend of misinformation was among the modern-day challenges and the spread of propaganda on social media was also changing the nature of war.

He recalled that the UN peacekeepers in Congo and Mali had been targeted by the misinformation campaign. Such new challenges call for cohesive actions by all the peacekeeping partners, he added.

He said CIPS was doing great service to peace by improving knowledge and understanding on peacekeeping. Moreover, he also appreciated the NUST for aligning the education in accordance with the sustainable development goals including equal opportunities, employment and environmental protection.

He told the gathering that Pakistan had contributed around 150,000 peace troops to the peacekeeping mission in 23 countries and 157 of them had sacrificed their lives which the UN would never forget. He also thanked the Government of Pakistan for contribution to a peaceful world.

Antonio Guterres said the UN peacekeeping had become a beacon of hope for millions of the people affected by conflict and instability.

Since 1948, over 70 peace missions had supported the countries in their transitions to peace and fostering an environment of development.

The UN chief said Pakistan was the first country to endorse the declaration of shared commitment on UN peacekeeping operations and thanked the government for stepping forward to champion the safety and security, performance and accountability.

Over the past two years, almost 150 partner organizations had followed Pakistan’s lead.

The secretary-general particularly lauded the contribution of Pakistan’s women peacekeepers saying that they were doing the thing which even their male counterparts could not do.

He said while pursuing the declaration, the UN had helped reduce the casualties during the peacekeeping efforts.

Rector NUST presented a souvenir to the secretary-general who later also inaugurated a photo exhibition depicting the peacekeeping efforts by Pakistan.

Zakaria said Pakistani soldiers were the most battle-hardened army in the world and it is due to the highest standard of physical fitness, professionalism and motivation of Pakistan Army troops.

He said over 400 Pakistani women are playing their role in global peacekeeping missions in the world.