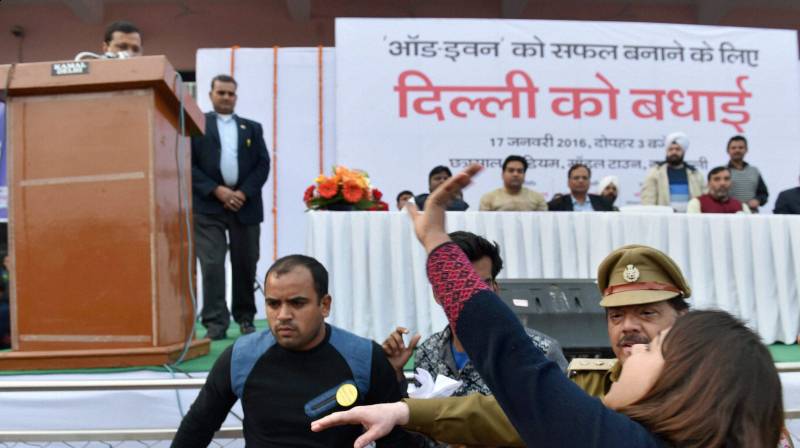 NEW DELHI (Web Desk) - A woman threw ink on Chief Minister Arvind Kejriwal while he was delivering a public speech at the Chhatrasal stadium in New Delhi on Sunday.

According to the Indian media, the woman, identified as Bhavna, claimed to be a member of Aam Aadmi Sena’s Punjab unit, accused Kejriwal of being involved in CNG scam. She walked towards the dais and threw ink, and some papers and a CD at Kejriwal. After some time, she threw ink at Kejriwal but it fell short of him though stains could be seen on the lectern. She however missed the target and the chief minister escaped the attack without getting dirty.

The ceremony at the Chhatrasal Stadium was organised by the New Delhi government to ‘thank them for the success of the odd-even trial’.

This is not the first time Kejriwal has been attacked in public. In 2014, he was slapped by a man during a roadshow in Sultanpuri area of northwest Delhi. On March 28 the same year, Kejriwal was hit on his neck by a man claiming to be a supporter of Anna Hazare in Haryana.

The AAP leader and some of his colleagues also became victims of an ink attack in Varanasi the same year, where he had challenged Prime Minister Narendra Modi in the Lok Sabha elections. An egg was also hurled at his car outside the famous Vishwanath temple on the same day.