What can possibly go wrong on Iran-Pakistan border? 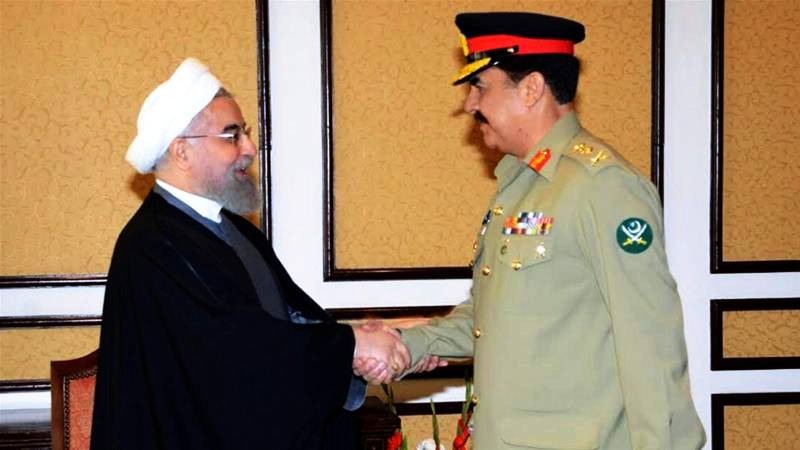 Melo-dramatism lies at the core of self-styled revolutionaries. This is the tool of ideological zealots, who seem oblivious to the costs. Iran’s military chief, Major General Mohammad Bagri, was following the same path when he threatened to go after alleged ‘terror safe havens’ inside Pakistan after 11 Iranian border guards were reported dead in a skirmish with Iranian armed men. His statement came days after his country’s foreign minister, leading a 12-member delegation including two generals, had agreed upon a mechanism with his Pakistani counterpart.

A couple of weeks later, the Iranian military accepted nothing different than what was already agreed upon at the ministerial level. So, what prompted the Iranian’s military chief to threaten a neighboring country through media?

The general was addressing a larger domestic audience, which are set to choose from a narrow list of candidates for the country’s presidency. Iran’s military, particularly the elite Islamic Revolution Guard Corps, are at odds with President Rouhani over a nuclear deal with the west, giving concessions such as releasing an American journalist, and cozying up to the Obama administration. The IRGC used the shootout at the Pakistan border, whose details are still sketchy and far from investigated, to amplify its narrative of weak leadership against Rouhani. Thus, Zarif cannot be said to solve the problem, which the revolutionary guards initiate or have stakes in.

After much bickering and posturing, Tehran has agreed with Islamabad to mutually boost border security arrangements to block the movement of terrorists, human traffickers as well as human smugglers. Moreover, a joint survey of Kachao Rabat and other border areas was also carried out to identify vulnerable points for incursions on the either side.

Iran holds Jaish al-Adl responsible for the attack on its border guards with “long-range gunfire.” Though the militant outfit is little known, it likely is a breakaway faction of Jundallah, which has been active since 2003 against the Iranian regime for its persecution of Sunnis and Balochs on sectarian and ethnic grounds. After the arrest of its leader Abdolmalek Rigi either through covert support of Pakistan’s Zardari government or forced landing of a Bishkek-bound flight and his eventual hanging, Tehran’s woes in Sistan-Balochistan never ceased to exist. Jaish al-Adl is alleged to have sanctuaries on the Pakistani side. While the facts have yet to be determined, the solution for the longstanding Iranian challenge lies with the country, in at par development and integration of Sistan-Balochistan. Stringent border management alone cannot address the oppression of Baloch people.

The theocratic state, itself, is partly responsible for implicitly overlooking movement of drugs, terrorists, human traffickers and smugglers on its borders with Pakistan and Afghanistan. It has long relied on such underground mafias to circumvent sanctions and push money and weapons to its proxies in neighboring Sunni states. These networks stretch from Zahidan all the way to Turkey-Greece border.

It’s amusing that a country being investigated for harboring India’s spy network in Gawadar and proven to have given nationality to Karachi gangsters, and for hiring mercenaries to fight for the Assad regime in Syria has threatened Pakistan on similar grounds. During Zardari-era, Iranians did attack Pakistan and killed Sunni Balochs affiliated with Jandullah, but it never happened after that. Every now and then, Iranian artillery finds its way inside Pakistani territory which is neither duly manned nor fenced or monitored though cameras.

Now that the issue has been brought to the table and in public view by Iran herself, Islamabad is anything but upset. According to the officials in the interior ministry as well as military circles, the saga offers an opportunity to bluntly confront the IRGC and the regime about Pakistani concerns that have previously raised politely. “If Iran uses the language of coercion, it will be met with in kind.” Pakistan has already stated that the Iranian army chief has acted against the spirit of brotherhood and friendship.

Taking Bagri’s threat literally, his military does not stand a chance for hot pursuit. The IRGC troops may enter by choice but returning home alive won’t be a walk in the park. If the general sent gunships or reinforcements, he would run the risk of a limited conflict. By any measure, the Tehran’s military is neither battle-hardened nor is it well equipped enough to match or dominate Islamabad’s. The Persians have perfected the nuisance of creating armed proxies, exploiting the rival’s internal fault-lines, and have aligned local elements on sectarian grounds. If the recently agreed mechanism fails to meet the desired goals, Tehran at best will rely on its clout in Pakistani media, civil society including political parties namely Pakistan Tehrik-i-Insaf and Pakistan People’s Party, before engaging its militant proxies. For Islamabad, engagement on border control goes a long way in cracking down on mercenaries leaving to fight for Assad in Syria through land routes, movement of Taliban and al-Qaeda leadership and smugglers of arms as well as drugs.

The Persians need Pakistan more now. Iran has ratcheted up the rhetoric against nearly all its neighbors including the nuclear-armed neighbor. In the event that Iran does go to war with the Arab states in the Gulf, its maritime trade will come to a halt. The Caspian Sea has severely limited navigational capacity due to bottlenecked channel of Volga River to the Black Sea. Amidst naval blockade, will it be able to financially sustain a prolonged battle with the Gulf nations like it did against Iraq? The Strait of Hourmuz is Iran’s jugular vein more than Saudi Arabia’s. That’s where Pakistan becomes Iran’s insurance policy. Rewind to its war against Iraq when General Zia prudently provided Iran access to Karachi port, despite protests by her Arab friends. With Chabahar going to India and the IRGC recruiting militarizing its Shiite community and using foul language against Pakistan, there’s little chance that Karachi or Gawadar will be offered to Tehran for maritime use in times of war.

More recently, Tehran has been drumming up the mantra of Chabahar being Gawadar’s sister port. Connectivity of the two via a metaled road means availability of the Pakistani deep-sea port when its own will fall vulnerable to the Arab states, namely Saudi Arabia, aerial and naval assault. The IRGC’s backup plan is torpedoed if Islamabad remains closely allied to the Arab nations in the Gulf. For that matter, Tehran went all out to publically oppose Pakistan’s membership of the Islamic Military Alliance against Terrorism.

For all practical purposes, the Iran border requires monitoring of a scale similar to that of Afghanistan’s. The Persians are wise enough to understand that they can’t manage too many fronts at the same time. The IRGC-inspired rash tone will continue to drive Pakistan closer to its traditional Arab allies.