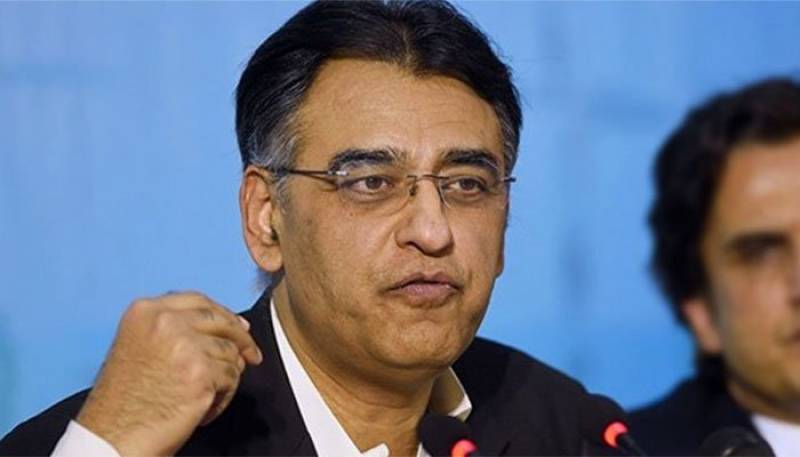 ISLAMABAD – Finance Minister Asad Umar has decided to step down amid reports of federal cabinet reshuffle and an International Monetary Fund (IMF) deal with Pakistan.

“As part of a cabinet reshuffle PM [Imran] desired that I take the energy minister portfolio instead of finance. However, I have obtained his consent to not take any cabinet position. I strongly believe @ImranKhanPTI is the best hope for Pakistan and inshallah will make a naya Pakistan,” he said in a tweet.

As part of a cabinet reshuffle PM desired that I take the energy minister portfolio instead of finance. However, I have obtained his consent to not take any cabinet position. I strongly believe @ImranKhanPTI is the best hope for Pakistan and inshallah will make a naya pakistan

Addressing a press conference shortly after the tweet, Asad Umar expressed firm commitment to continue working for materializing the dream of prosperous 'Naya Pakistan' under the leadership of Imran Khan.

He said Prime Minister Imran Khan intended to make some reshuffle in the federal cabinet and the announcement for further changes was expected shortly.

He said amid reshuffle news, he met with the prime minister last evening and this morning, convinced him on his decision to step down from the cabinet, instead of taking any other portfolio.

He said stepping down from the membership of the cabinet did not mean leaving Imran Khan’s vision for a developed and prosperous Pakistan, saying he was always available and would remain so in future.

"I shall always remain available for implementing the agenda of change introduced by Imran Khan, which has been based on economically stable and socially strong Pakistan and would continue my struggle for this as I believe in that the Imran Khan was the only person who could bring change in this country," he added.

“New Pakistan would become reality and Imran Khan would lead,” he said.

Comparing the economic condition of his eight months in seat with that of Pakistan Peoples Party and Pakistan Muslim League-Nawaz, he said the first eight months of Pakistan Tehreek-e-Insaf were far better than the corresponding period of previous two regimes.

He said when he assumed the charge, the economy was facing serious crisis, adding the government took tough decisions in order to set economic direction for long term sustainable economic growth.

He said the economic data was showing positive indicators, however, the economic conditions of the country was not still good.

He said the new finance minister would have to face many challenges and would have to take tough decision to put the economy on the path of sustainable development.

Asad expressed the hope that incoming finance minister would enjoy full support for making tough decisions keeping in view the future of Pakistan adding that any decision made in haste would further push the economy into crisis.

He said the next budget would have the reflection of International Monetary Fund (IMF) programme, saying it would not be a simple task for the new finance minister to prepare budget targeting 220 million people.

He said extended fund facility with IMF was negotiated and finalized on better terms and conditions and in the best interest of national economy.

He said his commitments were not affiliated with any position in the federal cabinet, adding he would continue his work as worker for the bringing reforms and change in the country according to the vision of Imran Khan.

Umar said the decision to remain out of federal cabinet was not any sort of protest as he would always be available to work for country’s interest whenever his party needed him.

He also clarified that leaving his portfolio had nothing to do with Tax Amnesty Scheme.  The minister also thanked PTI supporters, people of NA-48 and NA-54, social media activists and all those who supported his party.

Yesterday, Asad Umar appeared on a TV show where he was asked how will he react if he is removed as the finance minister and is given some other portfolio.

Responding to this, the minister said that he was living a good life before joining politics. “I had no plans of joining politics but Imran Khan repeatedly used to say to me that Pakistan needs me. Then I said I will come to politics if Pakistan really needs me. If I can work for the betterment of Pakistan then I will continue to do so,” he said.

The finance minister added, “If my work does not bring betterment to Pakistan or someone else can do the job better than me then he should.”

“I am not a career politician after all.”

Reports were circulating earlier this week about a possible reshuffle in the post for Minister for Finance and Minister of State for Interior held by Asad Umar and Shehryar Afridi respectively.

However, both PM spokesman Nadeem Afzal Chan and Information Minister Fawad Chaudhary dismissed the reports of Asad Umar's removal, saying there was "no truth" to them.

Moreover, the reports added, Minister of State for Interior Shehryar Afridi is likely to be replaced by PTI leader Ijaz Shah.

This is a developing story and will be updated as more information is received.