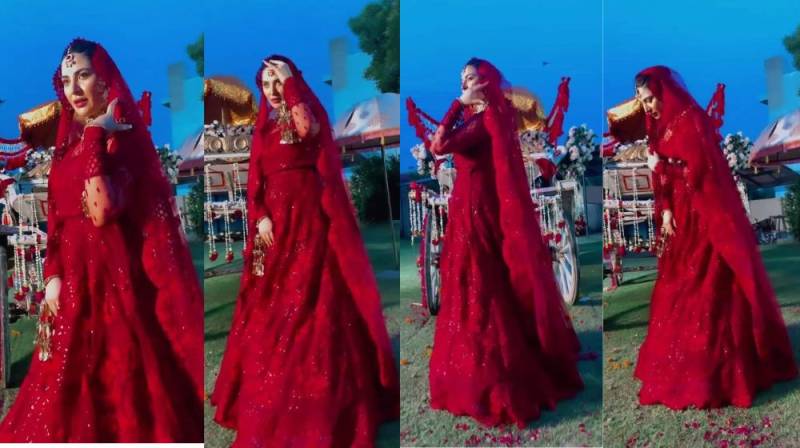 Naimal Khawar Khan, a Pakistani actress, is widely known for being the spouse of actor Hamza Ali Abbasi. Khawar is a talented lady who not only aced acting but also paints and acts as a social media influencer simultaneously.

Naimal Khawar Khan also started modeling for a few brands. Often seen posing for different local brands in Pakistan, Khawar has been the face of many designers. Recently, Naimal Khawar dolled up in a beautiful red bridal ensemble for a photoshoot.

Exuding elegance and ethereal beauty in a red lehenga, the doll-faced actress in a desi attire had the internet on fire. Naimal opted for a bright red ensemble with monotonous patterns fused altogether due to the lack of any contrast, patterns, or colours. She wore heavy jewellery. For makeup, it was too heavy overshadowing her natural beauty. Although Khawar stays low-key about her life, she wasn’t spared from the criticism of the cyber fashion police.

Her bridal photoshoot was glimpsed in a sceptical manner by netizens who were of the view that Khawar couldn’t pull off the look of a desi bride. Some went as far as to suggest that she looked like a heroine of Pushto films. Khawar kept her calm and did not respond to trolls.

The gorgeous actress worked in the drama serial Ana and gained a reputation for her god-gifted talent for acting. Also noteworthy is her debut project; a feature film Verna.