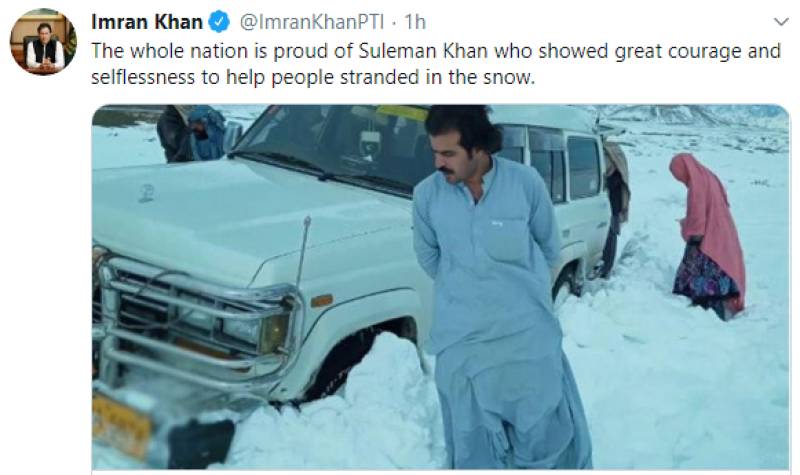 ISLAMABAD – Prime Minister Imran Khan has lavished praised on a brave man who saved more than 100 people stranded due to heavy snowfall in Pakistan's southwestern province of Balochistan.

"The whole nation is proud of Suleman Khan who showed great courage and selflessness to help people stranded in the snow," PM Imran tweeted on Saturday.

Earlier this week, the Quetta-Zhob highway was shut down due to severe snowfall in the Kachlak, Ziarat Cross, Khanozai, and Kan Mehtarzai areas of the Balochistan province.

Following which, hundreds of cars got stranded on the snowy ways, with women, children and elderly passengers left vulnerable in the harsh weather without adequate food supplies or clothes.

QUETTA - A resident of Quetta is being hailed as a hero after jumping into action to save the lives of 100 people. ...

Suleman Khan, ignoring the blood-curdling cold not only rescued several passengers by driving them to safety in his own car, but in a gesture of kindness that has touched the hearts of many across the nation, also opened his home to them for food and shelter.

The 30-year-old reached the stranded passengers on his Sports Utility Vehicle, a Toyota Land Cruiser, and helped the people to safety and comfort of his home without any assistance from the authorities.

The kindness of Khan, however, knew no bounds, as he also helped get fuel, paid out of his own pocket, to people whose cars had broken down on the road in the severe cold, thereby playing a pivotal role in getting them to safety.