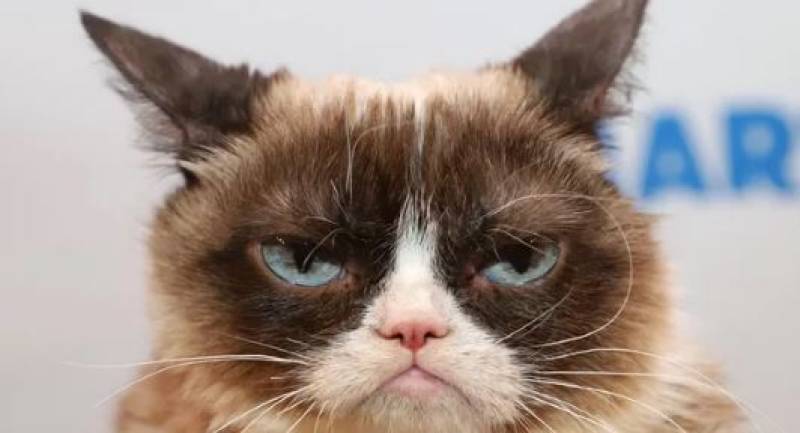 LAHORE -  On Friday (yesterday), the world learned that Grumpy Cat, the internet sensation whose scowl launched a thousand memes -- earning her 1.5 million Twitter followers and 8.3 million Facebook fans -- had died at the age of seven.

Grumpy Cat, whose pre-celebrity name was Tardar Sauce, burst to fame in 2012 when her owner's brother posted a picture of her mirthless mug on social media. Within 48 hours, her image had been viewed more than a million times.

A real-life Garfield on social media obsessed with cat pics: a star had been born. Six months later, as her fame spread around the world, Grumpy Cat appeared at the South by Southwest festival in Austin, Texas, where thousands lined up to have their photo taken with the celebrated sourpuss.

She was invited to star-studded movie premieres, had a cameo role in Sesame Street, took part in the Hollywood Christmas parade and had her own animatronic wax likeness at Madame Tussaud's -- which of course she was invited to be photographed with as it was unveiled.

The Lifetime Channel made a movie featuring the miserable-looking moggie called "Grumpy Cat's Worst Christmas Ever," and a New York Times bestselling book was written about her. Friskies cat food became an official sponsor and she had her own "meme manager."

Fans could buy Grumpy Cat socks, or an endless choice of tee-shirts emblazoned with ennui-filled slogans such as "Your face...I hate it" or "I don't care what you think, I'm napping."

The branded merchandising, which included pillows, pens, mugs and bags, as well as the sponsorship and media deals were estimated to have made her owner, Tabatha Bundesen of Arizona, a wealthy woman. It allowed her to quit her job as a waitress at Red Lobster within days of her cat's internet debut, US media reported.

Bundesen denied reports that she had made as much as $100 million from the cat's fame but has declined to say how much her pet earned.

The cat's image was hot property: last year, a California jury awarded Bundesen's company, Grumpy Cat Limited, damages of $710,001 in a lawsuit against a beverage company that had created an unauthorized line of "Grumpy Cat Roasted Coffee" and which was selling Grumppuccino tee-shirts without sharing profits.

Financially, Grumpy was a fat cat. But she was not bad-tempered in real life, according to her owner who attributed her scowly expression to the fact that she had feline dwarfism and a marked underbite.

Her death at the age of seven was due to a urinary tract infection, her Twitter account said, with the announcement, "Some days are grumpier than others."

"We are unimaginably heartbroken to announce the loss of our beloved Grumpy Cat," Bundesen wrote. "Besides being our baby and a cherished member of the family, Grumpy Cat has helped millions of people smile all around the world - even when times were tough," she said.

"Her spirit will continue to live on through her fans everywhere," she said.

Described by CNN as a "furry titan of the internet," Grumpy's obituary appeared in The Washington Post, Der Spiegel in Germany, Le Monde and even the Russian business magazine Kommersant.

And, of course, her demise was the top trending story Friday on Twitter, where fans posted thousands of messages of condolence and mourning.