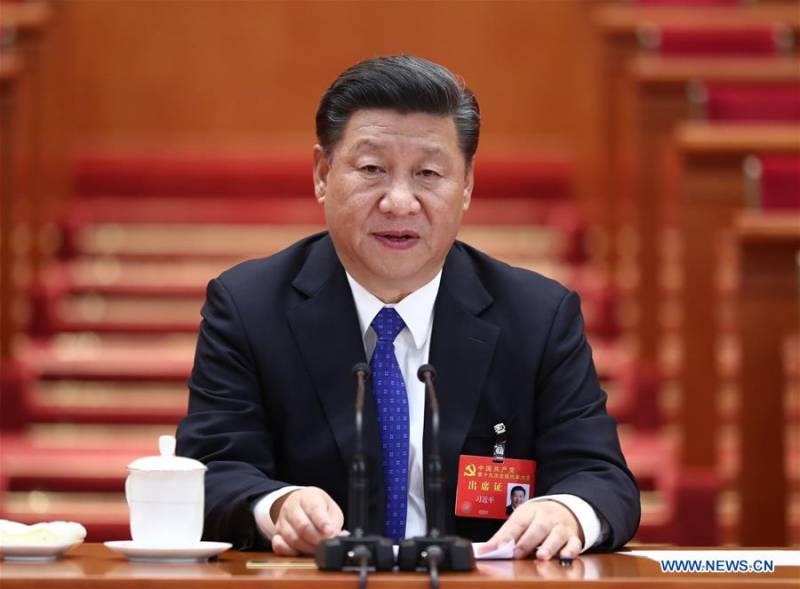 BEIJING - In a sweeping marathon address that lasted over three hours, President Xi Jinping unveiled his vision for China’s future of achieving “moderate” prosperity in the next four years and emerging as an advanced socialist nation by 2050.

In his “work report” of the past five years read out at the inaugural of the 19th party congress of the Communist Party of China (CPC) on Wednesday, President Xi was unambiguous in declaring that China stood at “new historical juncture,” and would pursue its own path of developing “socialism with Chinese characteristics.”

This implied that a western style “opening up” was not on Beijing’s radar. Xi, in the presence of former leaders Jiang Zeming and Hu Jintao, also underscored that the Chinese path of the development can be adapted appropriately by developing countries.

Some scholars such as Joshua Cooper Ramo have proposed that the "Beijing Consensus" supporting China’s economic development model can emerge as an alternative to the Washington Consensus of policies advocated by the IMF, the World Bank and the US Treasury.

In his address, Xi highlighted that the Chinese model was “blazing a new trail for other developing countries to achieve modernisation”.

He added that the Chinese path offers “a new option for other countries and nations who want to speed up their development while preserving their independence.”

In an interview with the state-broadcaster China Global Television Network (CGTN), China commentator Robert Lawrence Kuhn observed that President Xi’s speech recognised the linkage and integration between achieving the goal of a “moderately prosperous society” by 2021 — the centenary of the Communist Party of China — and the eventual goal of becoming an advanced nation by 2049 when the People’s Republic of China (PRC) celebrates its 100th anniversary.

He pointed out that Xi’s address revealed that China will keep developing as a “moderately prosperous society” between 2020 and 2035.

But in the second phase between 2035 and 2050, it will evolve “into an advanced nation and will be a global leader in all categories of human importance — economics, governance, science and technology and culture”.

In remarks meant to allay fears among neighbouring countries triggered by China’s rise, President Xi invited "peoples of all countries to join China's effort to build a common destiny for mankind and enduring peace and stability".

He said that Beijing will maintain a defensive policy when it comes to national security, and refrain from interfering in the domestic affairs of other countries.

Without referring to the US administration under Donald Trump, Xi underscored China’s pro-active support for globalisation and combating Climate change. "No country alone can handle all the challenges that mankind faces and no country can retreat into self-isolation," the Chinese President said, listing regional and economic instability, a widening wealth gap, terrorism, major epidemics, cyberspace insecurity, and climate change as major challenges facing humankind.

President Xi substantiated his doctrine of “four comprehensives,” covering deeper all-around reforms, a strict internal vigilance over the CPC, including a relentless anti-corruption campaign, as well as instilling the “rule of law” as the pathway for China’s all-round modernisation.

He announced a new anti-graft law, and the establishment of a national anti-corruption body to achieve these goals.  Xi also declared that a new “Leading Group” within the party would be established to ensure comprehensive governance through the “Rule of Law”.

#china Xi promises to eliminate 'the virus inside the Party'.

Xi's mention of his anti-corruption campaign gets big round of applause. pic.twitter.com/iiGWeNQ5dB

During the course of the once-in-five-year Congress which ends on October 24, the 2280 delegates will elect a Central Committee. In turn, the Central Committee will elect a 25-member Politburo, as well an apex 7-member or more Standing Committee of the Politburo. The General Secretary of the CPC, the highest-ranking official of the party — a position currently occupied by President Xi — would be picked from the Politburo Standing Committee’s ranks.

There is considerable speculation on whether Wang Qishan, Xi ally in the anti-corruption drive would be accommodated in the top-seven leadership rung, despite attaining the unofficial retirement age of 69. President Xi’s continuation in leadership beyond his second term that ends in 2022 is also being keenly watched.