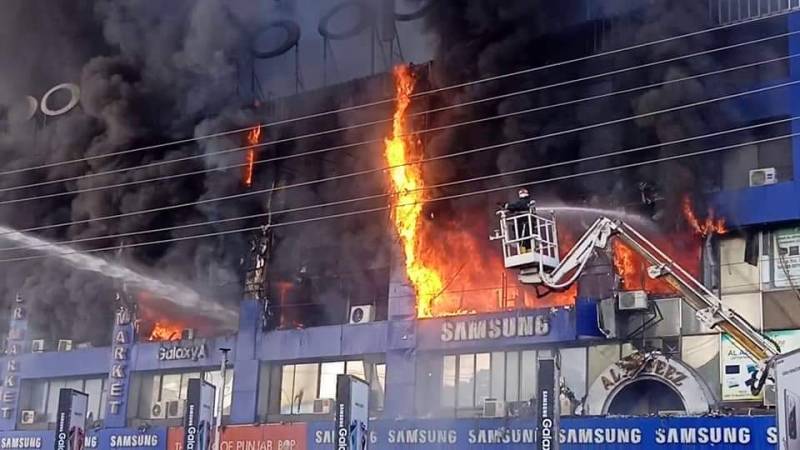 The fire was noticed by locals around 6:00 am and alerted the local administration. Shop owners alleged that fire tenders arrived late to the spot due to which the fire could spread further.

Eyewitnesses said the fire started on the second floor of the building but gradually travelled to the fourth floor. CCPO Sheikh Omer said 25 people had been rescued from the building so far and there were no reports of casualties so far.

Chief Minister Usman Buzdar is reportedly in constant contact with the Commissioner Lahore Division and rescue officials to ascertain the situation.

Here is how social media reacted to the fire:

It's really hurts because they are not a big business men they are just Like us middle class businesses May Allah safe they lives and help all those who have lose there shops and businesses #HafeezCentre pic.twitter.com/BtyxUwgjmG

#HafeezCentre isn't just a building It's a Largest Lahore Based IT hub.

May Allah give sabr to shop owners for their hug losses????pic.twitter.com/F7eb4KRBy1

Irresponsible policy making by government and law enforcement agencies. Should not allow any high rise building without proper HSE regulation and insurance. Only Gov is entitled to enforce the law. pic.twitter.com/zdjxcHPG3y#HafeezCentre

How difficult it is for a businessman to see their investment burning ???? like this Infront of their eyes while unable to do anything.. May Allah pak help everyone who've faced the loss ????!! #HafeezCentre pic.twitter.com/27lQSE6LCT

From having everything to Nothing,very tragic incident

This is Hafeez centre on fire since morning. #Dr_Yasmin #Provincialhealthminister was visiting to check out; this is spontaneous outburst of business community - why ? This is not any more about politics it is about sustenance, ordinary people feel the crunch of #hyperinflation. pic.twitter.com/vikbXaH7Jq