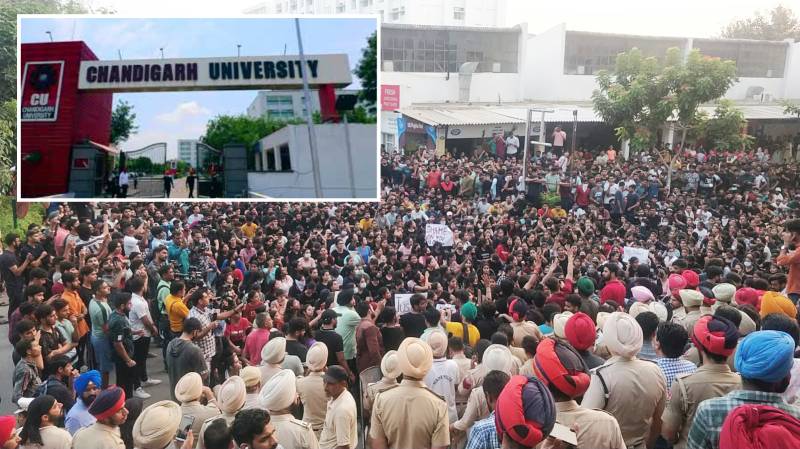 NEW DELHI – Students of a private university located in Indian Punjab came out and protested after a hosteller filmed obscene clips of other girl students and shared them online.

Earlier, the administration tried to cover the protest for the sake of varsity's repute; however, a girl reportedly attempted suicide on campus during the protest on Saturday and this prompted national and international media to cover the incident.

The law enforcement personnel rushed to Chandigarh University and dispersed the protesters and detained one of the students.

Cops then lodged a case against the accused girl, an MBA first-year student, under Section 354C of the Indian penal code and the IT Act, for filming obscene videos and sharing them online.

Indian Punjab Chief Minister Bhagwant Mann condemned the incident. “Sad to hear about the unfortunate incident…our daughters are our honour...a high level inquiry has been ordered into the incident...severe action will be taken against whoever is found guilty," he wrote in a tweet.

I am morally shaken by the ghastly incident at #ChandigarhUniversity. The name of my city is being tarnished due to this institute. I want to clarify that it is based in Kharar, Punjab. My heartfelt concern goes out to the girls & their parents who are a victim of this incident.

As the matter made headlines, the University Pro-Chancellor issued a statement, saying the rumour which is circulating through the media about objectionable clips is totally false and baseless. He said the accused filmed herself and shared it with her boyfriend.

Meanwhile, law enforcers denied any incident of death or injury amid the controversy.

Amid the contrasting claims, several students of the varsity took to social media claiming that the authorities are trying to cover up the disgraceful incident. #Chandigarhuniversity is also currently trending on the microblogging platform.