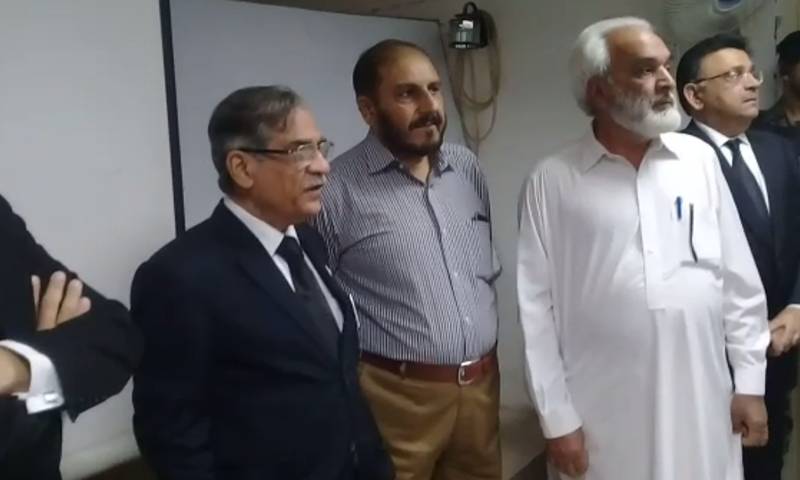 PESHAWAR - The chief minister of Khyber Pakhtunkhwa on Thursday failed to convince the country's top judge over his performance in the northern Pakistani province.

People in KP told CJP Saqib Nisar that nothing has improved for them in the province, during his tour to Peshawar.

CJP, on Thursday, was visiting the Lady Reading Hospital and Al-Razi Medical College where he inquired people about their problems. People responded that nothing has changed for them in the province.

The Pakistan Tehreek-e-Insaf’s (PTI) party slogan of Tabdeeli is failed to satisfy people in KP despite having the majority in provincial government.

As the term is about to end, people in KP seems to dissatisfy with PTI’s provincial government's performance. In spite of the expectations, they say, nothing has changed for them.

CJP said the KP government has miserably failed in establishing even a single waste recycling plant in the province.

He was hearing different petitions related to education, health and safe water provision at the Peshawar Registry of the Supreme Court.

CJP remarked that health-related issues increased when hospitals and municipalities dump their waste in the open.

He summoned KP CM Pervez Khattak today before the court and told him to explain his “good governance”.

He said, “We’ll sit at the courts till 2 am to sort everything out.” A report has also been sought from the health secretary on the condition of hospitals.

CJP remarked that the bureaucracy will have to work for ensuring the basic amenities to the common man. “No compromise will be made on the fundamental rights of the people,” he added.

Justice Nisar stressed on KP government to speed up the hydro-power projects for ensuring cheap electricity to the people. He also remarked that the province is resourceful to generate hydroelectric energy.

The IG ordered police department to call back the police officials by 2 pm today.

However, Chief Minister Khattak defended his government's performance, saying the structure of schools and hospitals was in shambles when he started and things have since improved.

"You would have seen [how bad the situation was] if you had visited four years ago," he said, adding that the results of his administration's educational and other efforts will become apparent 4-5 years later.

But the CJP appeared unconvinced, saying he has had to face "hopelessness" from every side. He said he was well aware that things were being cleaned up in Peshawar a week in advance of his visit.

Justice Nisar had earlier in the day grilled provincial officials over the steps taken to ensure that clean drinking water is available to citizens.

"Which canal are you throwing Peshawar's filth into?" he asked the KP Chief Secretary Azam Khan, and questioned why no dumping ground existed in the city for the purpose.

Justice Nisar took the secretary to task when he informed the court that sewerage water is dumped into canals and rivers. "You say everything is good here... what else is 'good governance'?" he asked.

At the outset of the hearing of a case about the disposal of hospitals' waste, the CJP remarked that the conditions in hospitals of Karachi and Lahore has improved on the court's orders and asked the health secretary what the situation was like in KP.

The health secretary revealed that a total of 1,570 hospitals are present in the province while two districts lack a district headquarters (DHQ) hospital. On the court's orders, the secretary submitted a report about the process adopted by the government to dispose of medical waste.

The CJP also heard a case about exorbitant fees charged by private medical colleges in the province.

At this, the CJP ordered the college to return the extra fees charged to students on an immediate basis. He also ordered authorities to seize the college's records and freeze its assets.