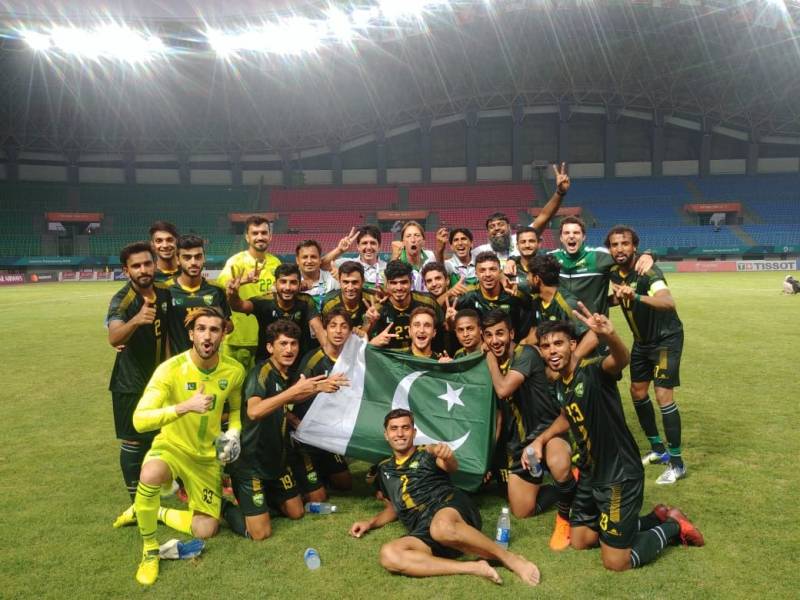 BEKASI - Pakistan football team have recorded their first victory in the Asian Games after nearly 44 years as they defeated Nepal 2-1 in their last group D match on Sunday.

The victory at Bekasi, Indonesia did not come easy though as the national team dug themselves a hole difficult to get out of, scoring an own-goal in the 12th minute, because of a mistake by Shahbaz Younus.

The team did make up for that mistake and eventually conjured up a hard-fought victory as Muhammad Bial scored in the 54th minute and then captain Saddam Hussain sealed the win after scoring a penalty in the 72nd minute.

Nepal took lead thanks to a comical own goal from defender Shahbaz Younas before Muhammad Bilal headed in a Mansoor Khan freekick and then captain @SaddamSH17 stepped up to score from penalty spot. pic.twitter.com/CsDmVsjiwB

The win brought hope for the country to progress to the knock-out round. However, it is highly unlikely that the team would qualify as Pakistan has the worst goal difference in the group, -6, as they were thrashed 3-0 by Vietnam in their first match and then lost 4-0 against Japan on Thursday.

Asia Games update. Bangladesh beat Qatar 1-0 with a late late goal finish 2nd and qualify ahead of Thailand in Gp B. Pakistan's chances of making next round increased. If Kyrgyzstan (vs S Korea), Myanmar (v Iran), and N Korea (vs Saudi) do not win their games tmrw, we go through! pic.twitter.com/8ia6PHsedS

The Pakistani soccer team went on to play in the Asian Games after three years of complete isolation from the world of international football.

Pakistan has only ever won three matches at the Asain Games football event now, the other two being in 1954 and 1974. The rules of fielding the teams at the Asian Games had changed in 2002, as the participating nations can field only three seniors players now, and the rest of the squad should be U23.