No other country had suffered as much as Afghanistan, the premier says 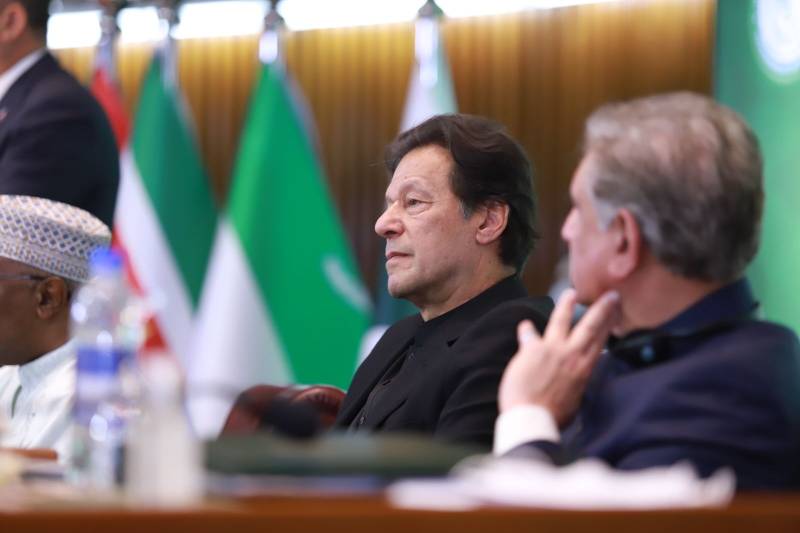 ISLAMABAD – Prime Minister Imran Khan has once again warned of the severe humanitarian crisis in Afghanistan saying that the Asian country could potentially become the biggest man-made crisis in the world if it did not act now.

Addressing the Extraordinary Session of the Council of Foreign Ministers of Organisation of Islamic Cooperation (OIC) being held at the Parliament House, the premier highlighted the dismal state of affairs in the war-ravaged country.

Khan said any country would collapse, If foreign aid dries up so quickly, foreign reserves are frozen, the banking system freezes. Biden administration has set conditions of human rights and inclusive government before foreign aid flows to Afghanistan.

Every society’s idea of human rights and women’s rights are different, PM said while mentioning that we have to be sensitive to cultures. Kabul under the new administration is heading for chaos and any government unable to pay salaries to its civil servants, hospitals, doctors, nurses, will surely collapse, he said.

He said the healthcare and education sectors in the landlocked country were in shambles, as he urged the world to take immediate action. If the Afghan government remained unable to counter-terrorism, other countries may also face a spillover impact, he warned.

The sole way to handle the terror outfits was a stable regime in Afghanistan. He mentioned the presence of IS in Afghanistan that was capable of carrying out international attacks.

Recalling Pakistan’s stance, he said we also had the same worry having faced the biggest collateral damage of the Afghan war with the loss of 80,000 people and the shattered economy, and displacement of 3.5 million people internally.

The 17th Extraordinary Session of OIC Council of Foreign Ministers is underway in National Assembly of Pakistan.

The key focus of this conference is to devise a strategy to address the humanitarian crisis in Afghanistan.#OICInPakistan #OIC4Afg pic.twitter.com/uBV4W8LMQ9

PM said no other country suffered from conflicts as much as Afghanistan. He called on OIC saying we had a huge responsibility as it was our religious duty too to support the suffering Afghan brethren.

The premier also requested the world not to link their support to the Afghan people with the Taliban, but they should think of 40 million Afghans heading towards catastrophic conditions.

Taliban-led administration will also have to understand that the formation of an inclusive government, respect for human rights, particularly women's rights, and disallowing the use of Afghan soil for terrorism in other countries, will pave way for international aid to Afghanistan, he said.

Khan also mentioned a meeting with the interim Afghan foreign minister in which he had categorically assured to comply with all the aforesaid conditions.

Foreign Minister Shah Mehmood Qureshi shared the proposal in his opening address at the 17th Extraordinary Session of the Council of Foreign Ministers of Organisation of Islamic Cooperation (OIC) being held at the Parliament House, Islamabad.

Qureshi, who is also the chair of the session, also proposed creating a mechanism within the OIC countries for sustainable humanitarian and financial support to the Afghanistan government.

The foreign minister also called for increased investments in the education and vocational sectors of Afghanistan, either bilaterally or through the OIC platform.

He also proposed the establishment of an expert group of the OIC and UN officials to revive the banking sector in Afghanistan that collapsed after the Taliban took over Kabul.

The FM commended Saudi Arabia for convening the session as OIC chair and trusting Pakistan to host the extraordinary moot. Besides other delegates, he also appreciated the secretary-general of the OIC for rapid mobilisation and arrangements for the session on short notice.

According to the foreign minister, the gathering of OIC leaders at a short notice also reaffirmed their commitment to addressing the humanitarian situation in Afghanistan.

Calling it a matter of survival, the foreign minister said over half of the Afghan population faced food shortage, which made the population of two-thirds UN member states.

He said Pakistan had hosted an OIC session on Afghanistan in 1980 and after 41 years, Islamabad is obliged to host another session on the humanitarian crisis in the same country as the sufferings of the Afghan people haven’t ended.

ISLAMABAD – An exclusive session of the Organization of the Islamic Cooperation (OIC) to discuss the simmering ...

Qureshi reiterated that the World Food Program and the UN have warned that Afghanistan could face the largest humanitarian crisis in the world.

He said it is a moment to stand up for the Afghan people and they must be supported without any condition.

An extraordinary session of the Organisation of Islamic Cooperation's (OIC) Council of Foreign Ministers to discuss the situation in neighboring Afghanistan has started at the Parliament House in Islamabad.

57 Islamic nations’ envoys, as well as observer delegations, are participating in today's session. Prime Minister Imran Khan is also present in Parliament and will deliver the keynote address at the inaugural session.

Moreover, officials of the UN, global financial institutions, international and regional organisations and important non-OIC countries like Japan and Germany have also been invited.

Pakistan, Saudi Arabia, and the United Arab Emirates were the only three countries to recognize the previous Taliban government of 1996 to 2001.

Prime Minister Imran Khan also expressed the hope that the Council of Foreign Ministers (CFM) of the 57-member Muslim bloc would focus the spotlight on humanitarian crisis in Afghanistan.

“I welcome delegations from OIC member states, observers, friends, partners and international organisations to Pakistan. The extraordinary session of OIC CFMs is an expression of solidarity with the Afghan people and to focus our collective energies on addressing the dire humanitarian situation in Afghanistan,” the premier said on Twitter.

The country’s federal capital was on lockdown, ring-fenced with barbed wire barriers and shipping-container roadblocks where security forces stood guard.

ISLAMABAD – A day before a key meeting in the Pakistani capital on the humanitarian crisis in Afghanistan, the ...