Ahed Tamimi: A 16 year old ‘too dangerous’ to release on bail 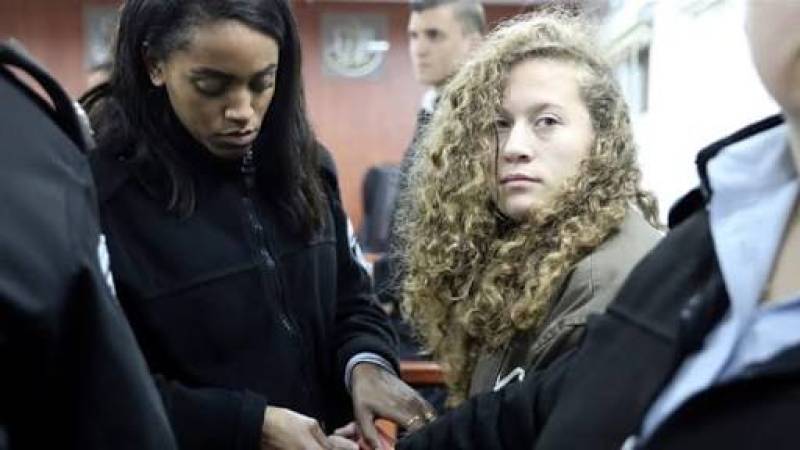 Ahed Tamimi a 16 year old Palestinian activist, the face of Palestinian resistance is behind bars

Palestine: For those of you who don’t know Ahed, she was born in the second generation to live in occupation. Ahed belongs to a small village Nabi Saleh and is the face of resistance in West Bank. From a very young age Tamimi stood up against the militants who would bomb, kill and torture the people living under the occupation. People/ supporters see her as a courageous and brave girl to stand up against the oppressors while the world stays silent on the matter. She took things in her own hands and confronted the soldiers in order to “help” and “save” her brother, she was just a 14 year old back then. Her mother filmed this incident and it got viral in 2015 in the hope to liberate herself and people like her who have been through worse Tamimi stepped up.

She is just like any other teenage girl who likes soccer and enjoys dancing but with bigger dreams and a hope to fight against oppression which not only she had to face but thousands of other people who weren’t documented. She was 16 when she participated in a conference  on the role of women in the Palestinian popular resistance which was held in the European parliament on 26 September 2017.

"We want to liberate Palestine. We want to live as free people. The soldiers are here to protect the settlers and prevent us reaching our land."-Tamimi

She was arrested by the authorities in December last year for confronting and slapping an Israeli soldier on camera for the oppression and pain they caused.

An Israeli militant court has rejected her bail as they think she is “Too Dangerous”. She will stay in detention until the end of her trial. She is charged with “aggravated assault”. Her trial will start later this month.

“Considering her age and the fact that she was born into occupation, taking into consideration that in the occupied territories you have two separate sets of law”. -explains her Attorney Gaby Lasky

Human rights activists and groups are joining hands to free Tamimi as the militant court is being criticized for their actions. The saddest part about all of this is that a sixteen year old girl is fighting against the oppression while the world stay quiet about it. #FreeAhedTamimi