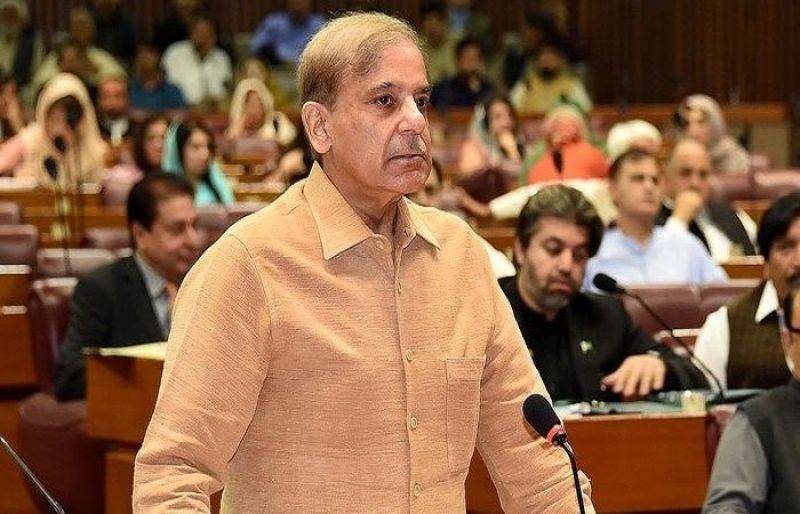 ISLAMABAD - Leader of the Opposition in the National Assembly, Shehbaz Sharif fired a broadside at the incumbent regime for failing to deliver on the promises it made to the masses.

The President of Pakistan Muslim League Nawaz was able to deliver uninterrupted speech in the Lower Chamber of the Parliament days after the budget was announced by the government.

In his explosive hours-long speech on Wednesday, the politician took a strong exception to the policies opted by the government and 'debunked' the successes made by the regime.

Sharif expressed that during the last stint of Pakistan Tehreek-e-Insaf in Khyber Pakhtunkhwa, not a single university or hospital was established in the province; he was disputed on the observation by Speaker National Assembly Asad Qaiser.

He lashed out at the government and claimed that the budget was actually made by the International Monetary Fund (IMF) instead of merely including its suggestions.

He defined the Peshawar's BRTS as 'biggest robbery in transport system'  and said metro bus tracks in three cities of Rawalpindi-Islamabad, Multan and Lahore of more than 100 kilometer have been completed comparatively at very much less amount than metro track in Peshawar.

The Opposition Leader said that cut had been made in the education and health sectors in this federal budget while Peshawar Bus Rapid Transit (BRT) project could not be completed so far despite taking loans from foreign financial institutions instead of grant’s offer by the federal government at this time.

The lawmaker expressed that 70 percent indirect taxes were imposed in the budget to meet the revenue target of Rs5.5 trillion.

Shehbaz Sharif expressed that the officials on pay roll of IMF were oblivious of the sufferings of masses and orphans as they were solely focused on slashing funds for development programs and to increase the premium rate.

'They are not concerned about the poor as they have to follow their patron, an example of which is Egypt and Venezuela,' Sharif said.

The younger Sharif expressed that the government, in its ten-months tenure, generated a deficit of Rs500 billion in the target achieved by PML-N.

Shehbaz quoted the figures about large-scale manufacturing and added that it showed a negative growth of 2pc while it was growing at 6 pc during PML-N's tenure.

The legislator contended that in the ongoing fiscal year, the government presented mini-budget twice, claiming that the incumbent regime would again go to IMF for failing to meet targets.

He said on very first day of this Parliament he had offered that like Charter of Democracy, the Pakistan Muslim League-Nawaz (PML-N) was prepared for CoE with PTI, but his sincere efforts were rejected.

On this, Speaker National Assembly Asad Qaiser asked whether it (CoE) could still be discussed?. In reply, Shehbaz said “it’s never too late…it is for Pakistan,” adding any charter could be signed for Pakistan, but it needed sincerity and seriousness.

He said members from both sides of the aisle in the Parliament should play their positive role to make the national economy stronger, saying a collective strategy was required. The speaker assured to play his role in this regard.

Shehbaz Sharif said that PML-N inherited power crisis when it came into power during 2013 through votes of the people. There had been days when there was no electricity for 20 hours in a day but this crisis was overcome through hard work, he maintained.

He also spoke about the cooperation of brotherly countries with Pakistan including China. He said that China invested 60 billion dollars through CPEC in the country while 11,000 megawatt electricity was generated during the tenure of PML-N.

He said the people have great expectations from this budget but they got nothing from it.

"Whenever a budget was presented, some segments were happy, others were unhappy. This is the first instance that the poor are strongly protesting," alleged the opposition leader.

He also spoke about the economic situation of the country and said that dollar rate went very much high against the Pakistani rupee. Prices of edibles have got increased while environment for industrialists is also challenging, he added.

About Neelum-Jhelum Hydro power project, he said that its actual cost got increased from 800 million dollar to 5 billion dollars during the tenure of former President Pervez Musharraf. This matter should also be investigated by the anti-corruption commission formed by the Prime Minister recently, he added.

Shehbaz Sharif said federal budget 2019-20 had been made by International Monetary Fund (IMF) and their representatives had been appointed on important posts in financial institutions of the country. They (newly appointed heads of financial institutions) had no idea about problems to the people of the country and they would only follow the policies and tracks of others.

He said tax or revenue collection target of Rs. 5500 billion set by this government was not achievable because they failed to collect Rs 4000 billion during last financial year.

He urged the government to avoid day dreaming and adopt policies for the welfare of the people. Not even a single project had been started for Sindh and unveiling the plaque of development project was the only its target instead of focusing on the completion of project, he added.

He said the government had mentioned in the budget to privatize two power projects which reflected efficiency of these projects and declined the allegations of kickbacks in these projects.