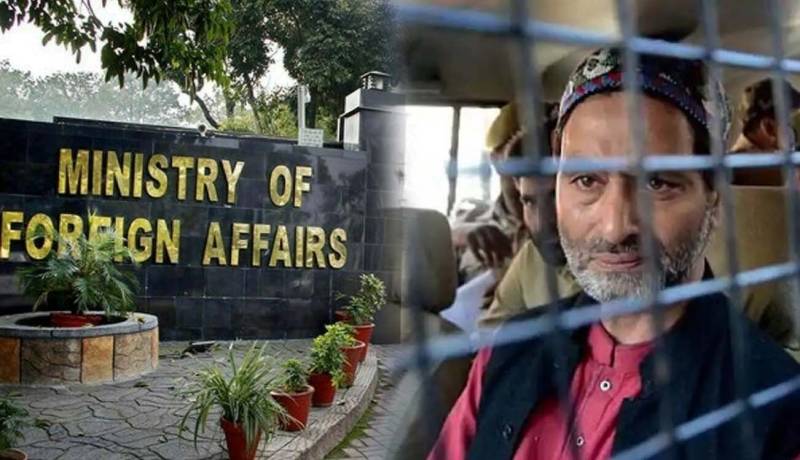 ISLAMABAD – Pakistan has summoned Indian Charge d’ Affaires who was handed over a demarche over framing of fabricated charges against Hurriyat leader Yasin Malik.

The separatist leader has been falsely charged with terrorist acts, for raising funds, plotting conspiracy, and sedition.

Foreign Office (FO) said an Indian diplomat was handed over a demarche conveying Islamabad’s strong condemnation over framing of fabricated charges against the Hurriyat leader.

Pakistan expressed grave concern in another step to suppress the voice of the indigenous Kashmiri leadership, as the Modi-led administration has resorted to implicating them in fictitious and motivated cases.

FO maintained that neither the malevolent Indian tactics of conjuring up false charges against Kashmiri leadership nor the environment of persecution, repression, and intimidation could quash the resolute struggle of the Kashmiris.

Pakistan also called upon the Government of India for Malik's acquittal from all baseless charges and immediate release from prison so that he could be reunited with his family, recuperate his health and return to normal life.

Indian Charge d’ Affaires was advised to prevail upon his government that rather than unlawfully keeping the Kashmiri leadership hostage and denying them their fundamental human rights, it must immediately halt its state-sponsored terrorism in the occupied Kashmir.

The Indian side was also conveyed to release all political prisoners incarcerated on trumped-up charges, stop human rights violations, lift the inhuman military siege and let Kashmiris exercise their right to self-determination.

Furthermore, Pakistan called on world leaders, including the United Nations and other human rights and humanitarian organizations to take immediate cognizance of the inhuman treatment meted out by India to one of the most prominent Kashmiri leaders.

Yasin Malik, who is considered a prominent pro-independence leader in the occupied Kashmir, leads Jammu and Kashmir Liberation Front (JKLF), which was banned by the Indian government.

The resistance against the Indian rule in occupied Kashmir started in 1989, with a majority of people in the region demanding merger with neighboring Pakistan.