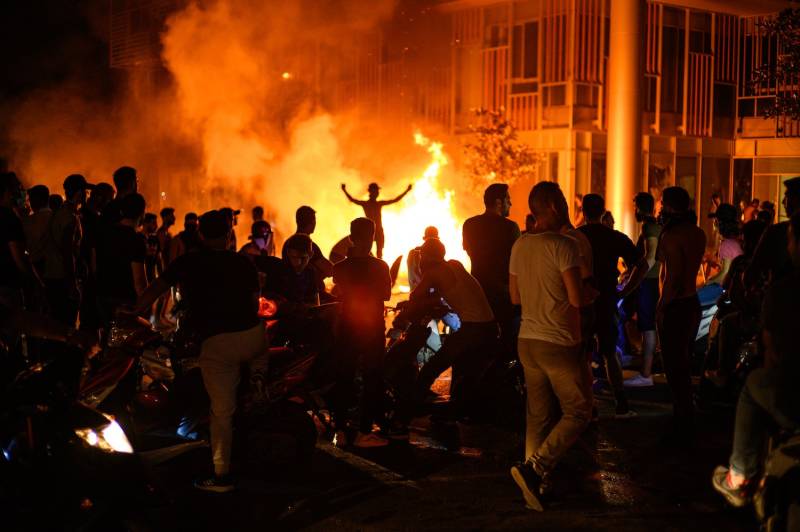 BEIRUT – Hundreds gathered in Lebanon Saturday for a third day of protests against tax increases and alleged official corruption after the security forces made dozens of arrests.

Crowds began gathering in front of the seat of government in the capital Beirut around lunchtime, with many waving billowing Lebanese flags.

Earlier, troops reopened blocked highways after security forces used tear gas and water cannons to disperse a huge crowd of protesters who had gathered in the heart of Beirut on Friday evening.

The Internal Security Forces said 70 arrests were made.

The protesters are demanding a sweeping overhaul of Lebanon's political system, citing grievances ranging from austerity measures to poor infrastructure.

Prime Minister Saad Hariri has given his deeply divided coalition partners until Monday evening to give their backing to a reform package aimed at shoring up the government's finances and securing the disbursement of desperately needed economic assistance from donors.

The current unity government has the backing of most Lebanese political parties, including Hezbollah.

Groups of young people gathered on the streets of the capital on Saturday morning collecting tyres and other material to make improvised roadblocks, correspondents for an international news agency reported.

Parts of central Beirut looked like a war zone, littered with broken glass, overturned litter bins and the remains of burning tyres. Banks and many restaurants and shops remained closed.

A team of workers in grey jumpsuits was dispatched to clean up the debris near parliament, even as around a dozen protesters chanted "Revolution, revolution".

The demonstrations first erupted on Thursday, sparked by a proposed 20 cent tax on calls via messaging apps such as WhatsApp.

Such calls are the main method of communication for many Lebanese and, despite the government's swift abandonment of the tax, the demonstrations quickly swelled into the largest in years.

Thousands of people of all ages, sects and political affiliations brought the capital to a standstill on Friday, before security forces dispersed them.

One protester in the southern city of Nabatieh, a Hezbollah stronghold, vowed to continue protesting.

"They are trying to portray us as a mob, but we are demanding our rights," he told a local television channel.

"We are used to repression." Lebanon has one of the highest public debt burdens in the world and the government is trying to reach agreement on a package of belt-tightening measures to cap the deficit in next year's budget.

The promised austerity moves are essential if Lebanon is to unlock $11 billion in economic assistance pledged by international donors last year.

Growth has plummeted in recent years, with political deadlock compounded by the impact of eight years of war in neighbouring Syria.

Lebanon's public debt stands at around $86 billion -- more than 150 percent of gross domestic product -- according to the finance ministry.

The International Monetary Fund projected on Thursday that growth would remain weak in the coming months.