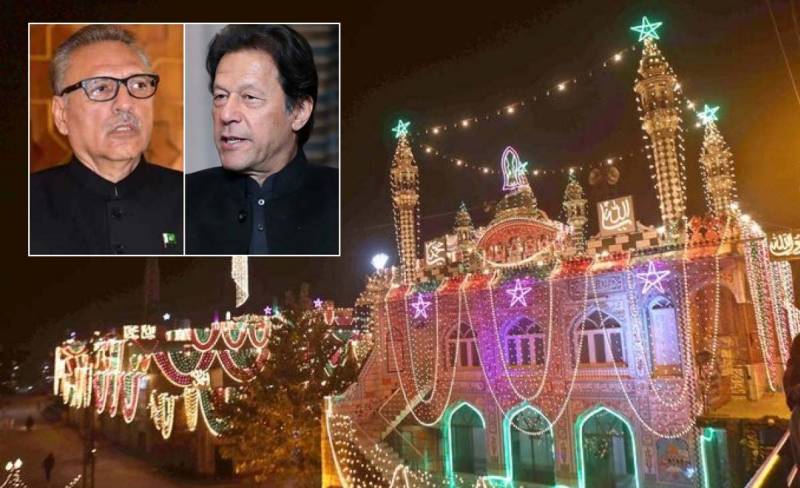 ISLAMABAD – In separate messages on the occasion of Eid Miladun Nabi on Tuesday, President Arif Alvi and Prime Minister Imran Khan urged the nation to follow the footsteps of Prophet Muhammad (PBUH).

President Dr. Arif Alvi said the only solution to the problems being faced by the Muslim ummah, including chaos, oppression, and injustice is following the seerat of Prophet Muhammad (PBUH).

The president also hailed the incumbent government's “exemplary efforts to make Pakistan a welfare state in line with Riyasat-e-Madina” saying we need to gain knowledge of seerat in order to understand the true concept of Islam.

Meanwhile, the premier in his message said the arrival of Prophet Muhammad PBUH in the world brought a revolution in every aspect of the human society. It broke the system of oppression in the world and opened the doors of welfare.

“Rabiul Awwal is a month when the Allah Almighty sent Prophet Muhammad PBUH as a guide for the success of humanity in this world and hereafter”, he said.

Khan reiterated that Holy Prophet laid the foundation of Riyasat-e-Madina which emerged as an example for others in terms of justice, humanity, and rule of law. Minorities were protected, poor and needy were taken care of and rights and obligations of the state and citizens were determined, the premier maintained.

PM Imran said the government had also formed the Rehmatul-lil-Aalameen Authority to apprise the people and the world about the life and teachings of Prophet Muhammad. The authority will make the world aware of the respect that Muslims give to Prophet Muhammad and will take steps for stopping Islamophobia.

He also called on parents to teach their children about the different aspects of the moral values espoused by Prophet Muhammad PBUH during education and character building.

Meanwhile, Interior Minister Sheikh Rashid also extended felicitations to the entire Muslim world on the auspicious occasion stating he was proud to be a follower of Prophet Muhammad (PBUH).