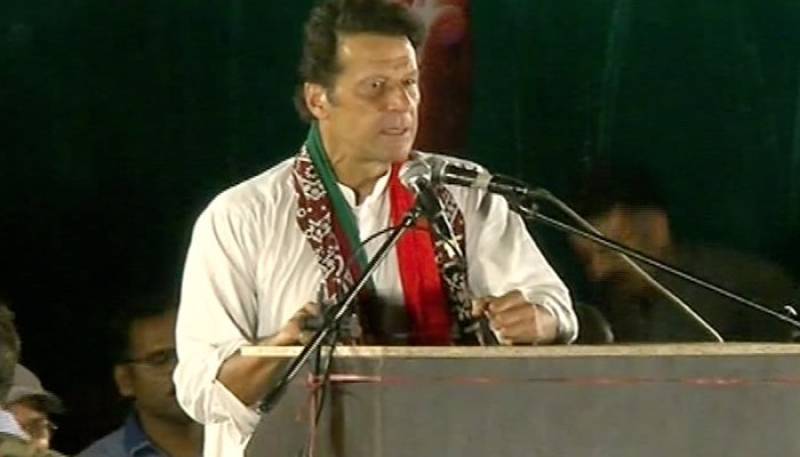 HYDERABAD - Pakistan Tehreek-e-Insaf chairman Imran Khan on Tuesday termed Pakistan People’s Party co-chairman Asif Ali Zardari as the ‘biggest disease’ in Sindh, and vowed to rid him from the province.

“I want to promise the people of Sindh. Asif Zardari is the biggest disease in Sindh,” he said addressing a public gathering in Hyderabad asking people for support to rid his corruption.

He said that he has been coming to Sindh regularly, and the situation has worsened. “Nowhere have I seen more filth than on my way here,” he said adding that situation will not improve until people do not strive for it.

Imran Khan said Zardari is the main reason for the destruction of Sindh, after he made a pact with Nawaz Sharif in the name of Charter of Democracy and bought the National Accountability Bureau (NAB).

He said that no one has caused more damage to Pakistan than former Prime Minister Nawaz Sharif, who ruined institutions to protect his corruption. “If institutions were working properly, then both brothers would have been in jail.”

The result, Imran said, is that Pakistan remains one of the poorest countries in the region, even lagging behind Bangladesh in some aspects, while Sharif and his children are the richest in the country.

He said that Nawaz Sharif has been ousted from power, and now it time for Zardari and he will also be in jail.

He said the PTI will strive to alleviate poverty in Sindh, and people will not have to go abroad for cancer treatment. He added that poverty has declined in Khyber Pakhtunkhwa but increased in Punjab.

PTI chief said it was pitiful that PPP which was founded in Lahore has been politically obliterated in the NA120 by-election. PPP had won the constituency three times but received a dismal 1500 votes in the bypolls.

He said that Maryam Nawaz crticised the judiciary and army, and called on to vote against the verdict which disqualified Nawaz Sharif. He said that Nawaz, like Muttahida Quami Movement founder Altaf Hussain, will be confined to telephonic addresses lashing at national institutions.

“The two godfathers are now together in London,” he said. “Now both will make telephonic addresses against Pakistan.”