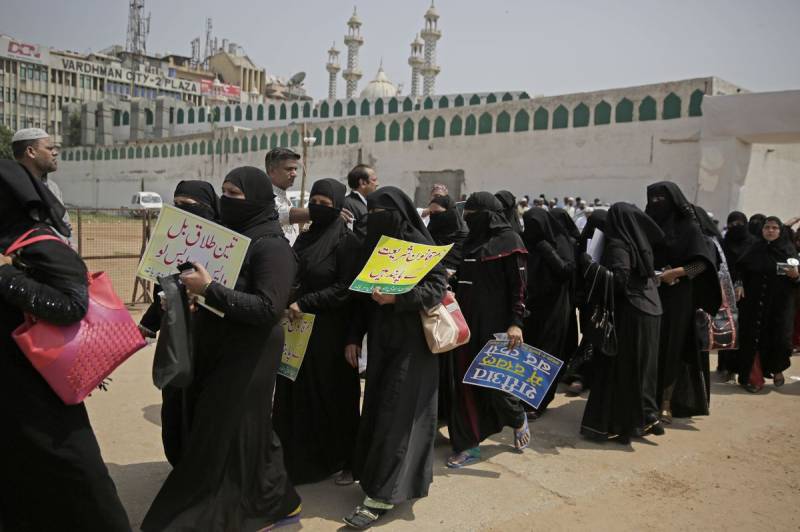 NEW DELHI - India Wednesday approved a ban on the Islamic practice of instant divorce or triple talaq common among the country's minority Muslims, in a landmark move hailed as a victory for the community's women.

By passing an executive order, the Indian Cabinet, headed by Prime Minister Narendra Modi, made triple talaq in any form - spoken, written or electronic means like email or SMS - an offence, though a ceremonial approval is still required from Indian President Ram Nath Kovind.

Under the proposed law, Muslim men who end their marriage using instant divorce, or talaq-e-biddat, will now face a jail term of up to three years and a fine.

The Indian government resorted to passing the ordinance after it failed to garner support from some opposition parties, mainly the Congress, to get the triple talaq legislation through Rajya Sabha (the Upper House of Parliament) even though the Lower House already approved it.

Making the announcement, Indian Law Minister Ravi Shankar Prasad said the government was compelled to bring in the ordinance to ban instant divorce as it was still prevalent, despite being already annulled by the country's Supreme Court last year.

Magistrate can grant bail to the husband who has given #TripleTalaq only after hearing the wife: @rsprasad

"Between January 2017 and September 2018, 430 cases of triple talaq have been reported. While 229 cases were reported prior to the Supreme Court judgment, 201 cases reported after the order," the minister told the media in the national capital.

Custody of the minor child will remain with the mother in case of #TripleTalaq who is also entitled for maintenance as determined by the Magistrate: @rsprasad

"So we have now officially passed the (anti) triple talaq ordinance, making the practice an offence. It's a victory for Muslim women," he added.

However, the instant divorce law, formally known as Muslim Women (Protection of Rights on Marriage) Bill, 2017, has been passed with some riders.

"The core component of this ordinance is that an offence will be crime only when the FIR (First Information Report, a police case) is filed by the victim's wife or her close relations by blood or marriage," Prasad said.

Other amended provisions allows a woman to drop the police case after a compromise with her husband, while under another provision, a court can give bail to the husband after hearing his wife in a case, according to the Indian government.

The law minister also came down heavily on the Congress party for failing to support the government in passing the legislation in the Upper House of Parliament.

"We tried to reach out to the Congress party. It's shocking that a woman leader like Sonia Gandhi did not cooperate with government to get rid of the barbaric process of triple talaq," he said.

Though Talaq-e-biddat (instant divorce) has no mention in Sharia Islamic law or the holy Quran, the practice has existed for decades that allows a man to divorce his wife just by uttering the word "talaq" thrice.

Most Islamic countries have banned triple talaq, but the custom has continued in India, which actually does not have a uniform set of laws on marriage and divorce that apply to every citizen.

NEW DELHI -  The Indian Supreme Court on Tuesday imposed a ban on a practice that allows Muslim men to divorce their ...

Though India's Supreme Court struck down the practice as "illegal" in a landmark judgment on Aug. 22 last year, the practice is still prevalent in India.

Campaigners have hailed the government's latest proposed move. "This will empower Muslim women, many of whom have for long suffered at the hands of their husbands," said Heena Khan, a Muslim activist.

Hindu couples in India, however, are required to go through a separation period to explore chances of reconciliation before being granted divorce by a family court.