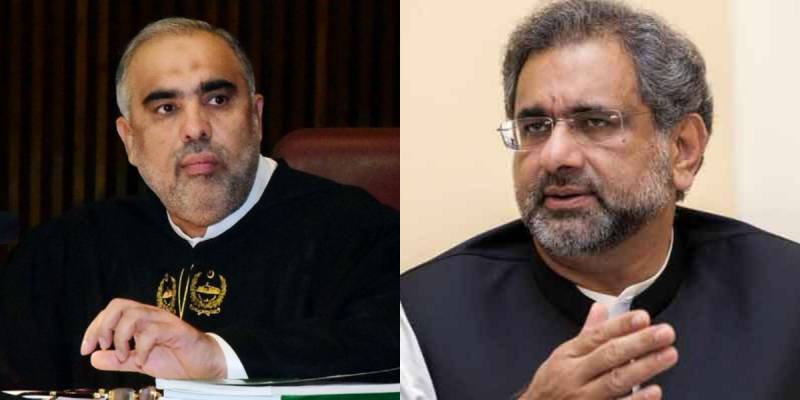 ISLAMABAD – Pakistan Muslim League-Nawaz (PML-N) lawmaker Shahid Khaqan Abbasi on Tuesday engaged in a spat with National Assembly Speaker Asad Qaiser during a debate on resolution pertaining to expulsion of French Ambassador from the country.

The resolution was tabled by PTI MNA Amjad Ali Khan after the government and TLP held successful talks.

While expressing his remarks, the former prime minister hit out at the government for not taking the Opposition into confidence in this regard. He also called for adjourning the session so the Opposition could review the resolution and put forward its recommendations.

In turn of events, the PML-N leader traded heated words with speaker with former proceeded to the stage of speaker and shouted: “Have you no shame?”

The speaker then replied “Hold your tongue and be in your limits.

As the situation intensified, the PML-N stalwart threatened: “I will take off my shoe and hit you.”

Speaker Asad Qaiser replied that he will do the same with him. He asked the PML-N leader to go back his seat and continue his address.

Federal Information Minister Fawad Chaudhry has condemned the PML-N over the threats to the speaker, adding that if Abbasi will get reply with 100 shoes if he hurls one.

ISLAMABAD – A resolution demanding the expulsion of French ambassador from the country has been presented in the ...