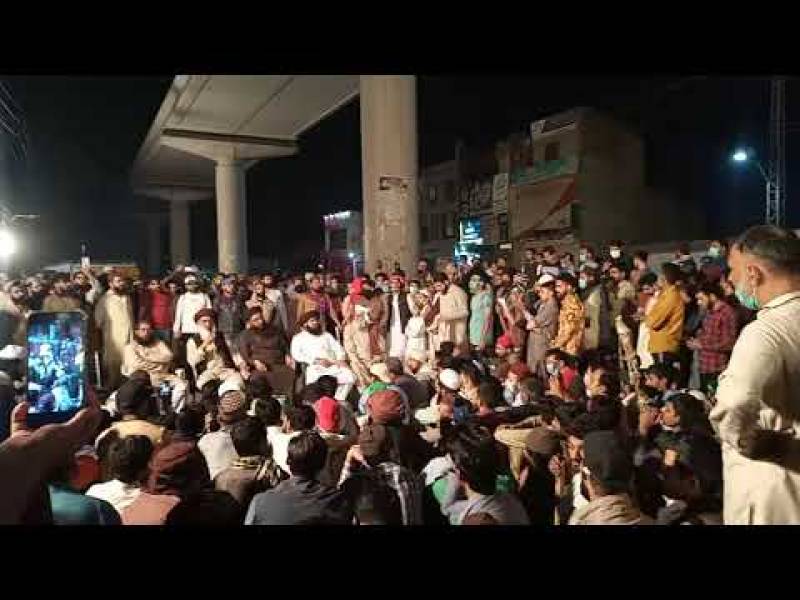 LAHORE – Tehreek-e-Labbaik Pakistan (TLP), a proscribed outfit, has announced to end its central sit-in in Lahore and protests other parts of country, concluding over a week-long tense situation in the country.

The development comes after the PTI MNA Amjad Ali Khan tabled a resolution, asking for a debate on the expulsion of French envoy over publication of blasphemous caricatures.

Shafiq Amini, the leader of banned outfit, said that the government had fulfilled its promise by presenting the resolution in the parliament, therefore, the protest is being stopped.

A resolution demanding the expulsion of French ambassador from the country was presented in the National Assembly by PTI MNA Amjad Ali Khan on Tuesday.

The resolution stated, “This House condemns the blasphemous acts committed by a French magazine and further condemns the French president for promoting such acts.”

It called for a debate in the National Assembly on the expulsion of France envoy and raising the matter with Muslim countries to devise a joint strategy on the sensitive matter.

The resolution further stated that France and other European countries should be apprised regarding the gravity of the matters relating to the blasphemy acts besides also raising the matter at international forums.

Speaking on the occasion, Religious Affairs Minister Pir Noorul Haq Qadri said that this house is the guardian of the sanctity of the Holy Prophet (PBUH) and Prime Minister Imran Khan has advocated the issue at the international forums.

Taking the announcement to his official Twitter handle, he added that the government has decided to table a resolution on the expulsion of the French ambassador in the National Assembly today.

Meanwhile, the right-wing party has four demands on which they negotiated with government officials. First is the expulsion of the French envoy over blasphemous caricatures, second the release of Saad Rizvi. Third, the removal of the ban on TLP, and fourth is to the release of all activists.

PM Says Expelling French Ambassador Not the Way Out

On Monday, Prime Minister Imran Khan said that the government and the banned Tehreek-e-Labbaik Pakistan (TLP) are on the same page regarding the protection of the Prophet Muhammad (PBUH)’s honour, but the methods are different.

Expelling the France ambassador is not the way out, he stressed in an address to the nation. The West has made this an issue of freedom of speech and if we send back the French ambassador, some other European country will follow the same, he said. He said that if Pakistan starts sending back ambassadors of different countries, the economy will suffer, but it would not make a difference to France or any other country.