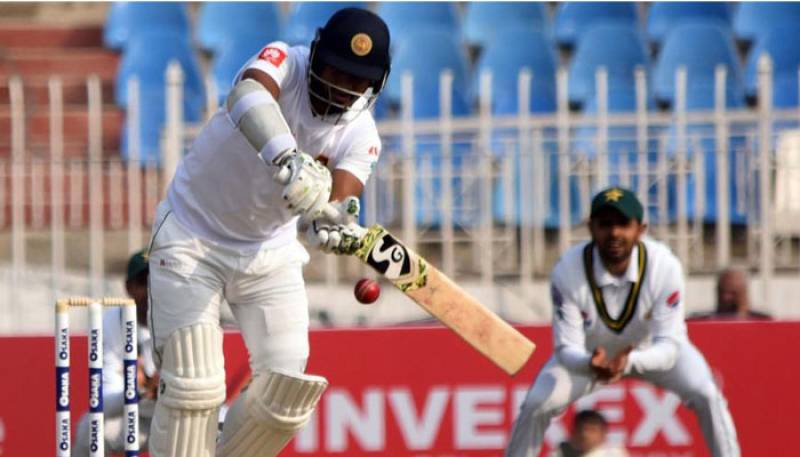 KARACHI - Dinesh Chandimal hit a steady half-century to give Sri Lanka a crucial 60 runs lead over Pakistan on day two of the second and final Test in Karachi on Friday.

At the break, Dilruwan Perera (35) and Vishwa Fernando (0) were at the crease.

With his team wobbling at 80-5 in the morning, Chandimal built partnerships of 67 with Dhananjaya de Silva (32) for the sixth wicket, 37 for the seventh wicket with Niroshan Dickwella (21) and then another 51 with Perera.

Chandimal was finally dismissed by part-time spinner Haris Sohail, caught at the backward point after he mistimed a cut. He hit ten boundaries in his 143-ball knock.

Abbas had nightwatchman Lasith Embuldeniya caught in the slip for 13 before lanky left-armer Afridi dismissed Angelo Mathews, also for 13.

De Silva, who scored a century in the first Test, batted with grit to frustrate Pakistan and take Sri Lanka to 170-6 at lunch.

Afridi broke the stand by luring De Silva into hooking straight into the hands of deep square-leg fielder Abbas, who held a running catch.

The Test series — part of the ongoing World Test championship — is the first in Pakistan since 2009.

The rain-ravaged first Test in Rawalpindi was drawn.