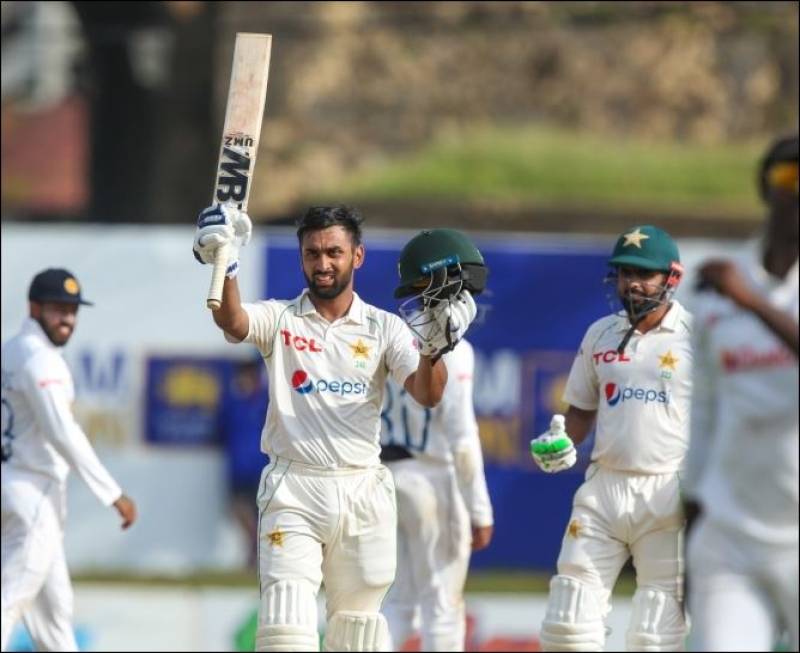 Pakistan resumed its second innings at 222 on the fifth day of the game to achieve their second highest-run chase of 342 in Test cricket, with in-form Shafique and Mohammad Rizwan on the crease.

Sri Lanka managed to dismiss two key players in the second half of the morning session, with Prabath Jayasuriya first removing Mohammad Rizwan lbw, before having debutant Agha Salman caught out.

Shafique smashed 158 runs, helping Pakistan to take a 1-0 lead in the two-match series, while Mohammad Nawaz, who was pairing with him on the crease, made 19 runs.

Chasing the target for victory in the first Test on a spinners’ friendly Galle surface, Pakistan were 222 for three at the close of play on the fourth day and needed another 120 runs to take a 1-0 lead in the two-Test series.

22-year-old Abdullah Shafique, playing just his sixth Test match, was leading Pakistan’s charge when he was unconquered on 112. With him was vice-captain Mohammad Rizwan on seven, who had walked into bat six overs before stumps after captain Babar Azam missed the line of the ball and was bowled round his legs after scoring 55.

Babar, who had scored 119 runs in the first innings and became the 19th Pakistan batter to complete 3,000 Test runs when he reached 30, put on 101 runs for the third wicket with Abdullah. Babar’s 104-ball innings was studded with four fours and a six.

Left-arm spinner Prabath Jayasuriya, who had claimed 17 wickets in the three innings before Pakistan’s run-chase, picked up the wickets of Azhar Ali (six) and Babar Azam, but was made to toil on a surface of his liking when he ended the day with figures of 35-6-89-2.

Opener Imam-ul-Haq was unlucky and unfortunate to be stumped off Ramesh Mendis when his foot was fractionally in the air. The left-hander was looking solid and comfortable in his 73-ball 35 as he added 87 runs for the first wicket with Abdullah.

Abdullah will require complete support from the middle and lower middle-order that may not have the same experience as Misbah-ul-Haq’s side from the 2015 Test. But where there is will, there is a way and Abdullah has demonstrated that victory is possible only if each and every delivery is played on its merit and no opportunity is wasted in keeping the scoreboard moving.

Earlier, Sri Lanka resumed their second innings at 329 for nine and were dismissed for 337. Dinesh Chandimal added eight runs to his overnight score of 86 and returned unbeaten on 94. Jayasuriya was the last man out when he fell to Naseem Shah.