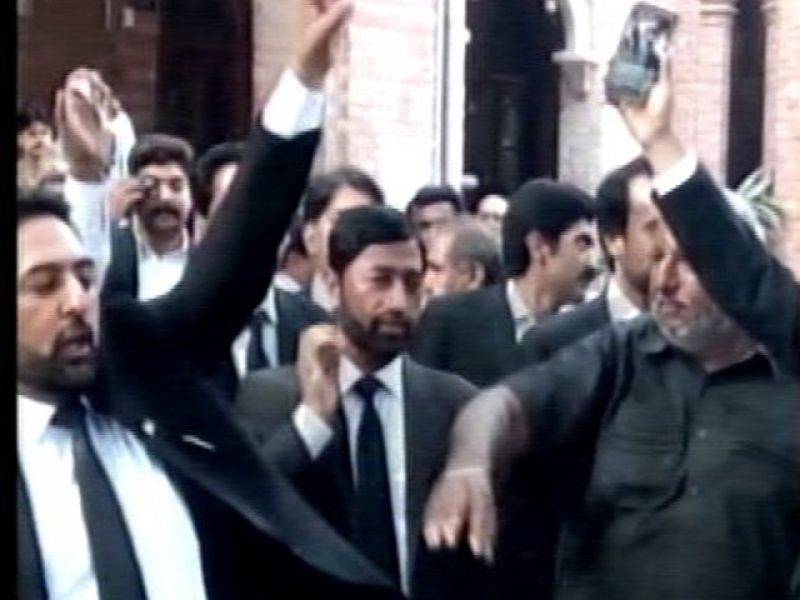 LAHORE - A furious bevy of lawyers attempted to break a security cordon and enter a courtroom at the Lahore High Court (LHC) where Chief Justice Mansoor Ali Shah headed a full bench hearing against Sher Zaman Qureshi, the head of the bar association of Multan.

According to media reports, the Lahore High court was hearing a contempt of court case pertaining to misbehavior of lawyers with Justice Muhammad Qasim Khan of Multan bench.

As soon as the Chief Justice Mansoor Ali Shah directed the police to arrest Qureshi and his secretary and produce them in court, a group of lawyers became enraged and broke a walk-through gate of the court.

The lawyers, after chanting slogans against LHC Chief Justice, blocked the special entry gate for judges and pelted stones at the building while refusing to accept LHC's non-bailable arrest warrant for Qureshi.

What exacerbated the situation was lawyers attempts to storm the CJ block that was thwarted by police.

Sensing the heat, the authorities also used a water cannon to disperse the protesting lawyers, who also blocked Mall Road, the thoroughfare in front of the court building.

Currently, the police are using tear gas and water cannons to calm down the situation as the lawyers are still on Mall Road protesting against the order of the court.

Attorney General of Pakistan (AGP) Ashtar Ausaf Ali expressed deep sorrow and remorse at the clashes between lawyers and police outside the LHC.

'Bench and the bar complement each other and have to work in harmony. Consumers of justice depend on them and any rift between them will be perceived by people as a failure of the justice system,' the AGP said in a message to the bar leaders and the lawyers.

'The dignity of both institutions has to be maintained at all costs.' he added.

On July 24, Qureshi and a group of lawyers allegedly misbehaved with Justice Muhammad Qasim Khan and obstructed judicial proceedings of his court at the Multan bench. They also vandalized and ransacked the court premises and removed the name plate of the judge.

Expressing displeasure over the lawyers’ behavior, the LHC chief justice Syed Mansoor Ali Shah had taken a strong notice of the incident and had constituted a committee to probe the matter.