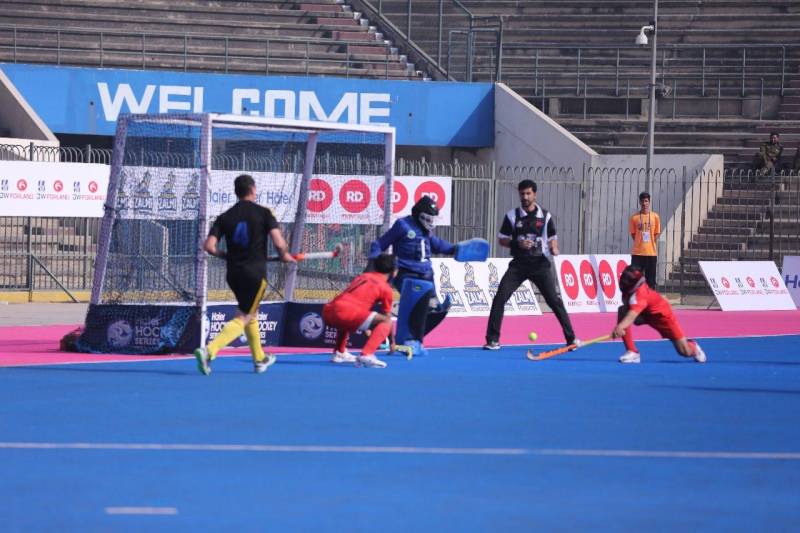 LAHORE - Nepal outplayed Afghanistan 4-0 to finish third in the Haier FIH hockey series, here on Friday at the National Stadium.

Nepal and Afghanistan, the two bottom teams of the series, had lost their previous two matches; so it was the battle for the third position on a cold and dump day. Since Nepal enjoyed a better goal difference, even a draw was enough for them to finish third.

Nepal came out off the blocks quickly and went ahead within the three minutes. Their dangerous forward Roman Rana scored with a reverse flat push from the top of the circle.

The Nepalese remained the better side for most of the time and scored a goal in all the four quarters. Second and third goals came off penalty corners. Sagar Acharya flicked high into the net each time.

Afghanistan had their best spell in the last quarter when they desperately searched for a goal. Three of their four penalty corners were earned during this period.

With Afghan players moving up in number, gaps appeared in the defence and Nepal took benefit by sending long balls into the circle.

One of which resulted in the fourth goal. Rajendra Karki, unmarked at the circle, received a good pass. He beat the advancing goal keeper before pushing it in the empty goal.

SCORERS: Sagar Acharya 2, Roman Rana and Rajendra Karki one each.

The second fixture of the day was a friendly match in which Pakistan President XI outshone Kazakhstan 8-1. CEO Asian Hockey Federation Tayyab Ikram was the chief guest.

The hosts began in a stormy fashion. The nimble footed forward Zaheer netted twice in the first seven minutes. Three more goals were added to the first quarter. So they were 5-0 up after first 15 minutes.

However, in the latter quarters, the President XI could add only three, one in each. There was a lot of missing. The team management gave chance to the reserves as well. Seven goals came via open play with one off a penalty corner.

Kazakhastan managed one in the second quarter when Aman Yelubayev standing unmarked at the top of the circle caressed a long ball on to the board.

It was President XI's third win in as many matches.

Pakistan: Zaheer Hussain 2, Asif Hanif, Samiullah, Ali Raza, Abdul Mannan,Shahbaz, Awaisur Rehman, Kazakhstan: Aman Yelubayev Matches for Saturday: In what would be a virtual final, Uzbekistan and Kazakhstan meet in the last fixture of the event on Saturday.

Both have won their earlier two matches and are equal on points but Uzbekistan have a better goal difference.

Before this game, Pakistan President XI will play their last friendly match against Afghanistan.