New fighter jets to be built in Pakistan as part of expanding cooperation with China: NYT 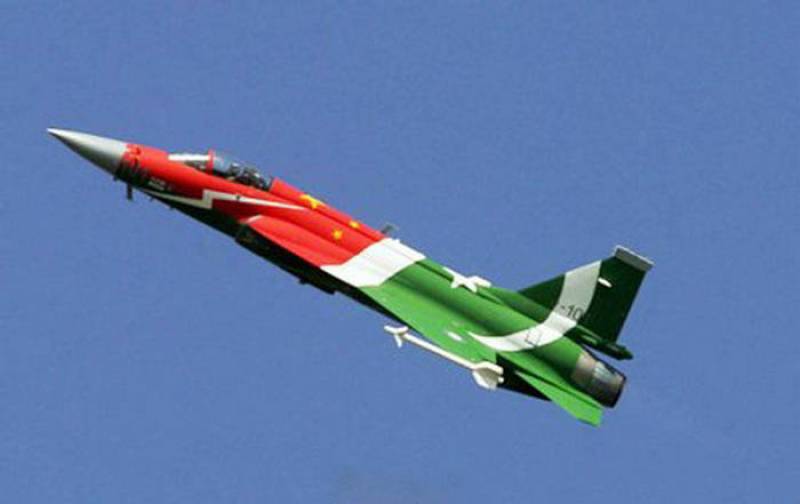 NEW YORK/ISLAMABAD – Pakistani Air Force and Chinese officials are putting the final touches on a plan to expand Pakistan’s building of Chinese fighter jets, weaponry and other hardware, The New York Times reported Thursday in a long dispatch claiming that Beijing's "Belt and Road" plan was taking a "military turn".

The dispatch said that the newspaper had "reviewed" the confidential plan which it says also envisages the cooperation between China and Pakistan in space.

"All those military projects were designated as part of China’s Belt and Road Initiative, a $1 trillion chain of infrastructure development programmes stretching across some 70 countries, built and financed by Beijing," Times' correspondent Maria Abi-Habib wrote from Islamabad.

KARACHI - A JF-17 Thunder shot down a slow speed target with BVR (Beyond Visual Range) and IR (Infrared) air-to-air ...

Pointing out that Chinese officials had insisted that the Belt and Road was purely an economic project with peaceful intent, the Times said, "But with its plan for Pakistan, China is for the first time explicitly tying a Belt and Road proposal to its military ambitions — and confirming the concerns of a host of nations who suspect the infrastructure initiative is really about helping China project armed might.

"As China’s strategically located and nuclear-armed neighbour, Pakistan has been the leading example of how the Chinese projects are being used to give Beijing both favour and leverage among its clients, correspondent Abi-Habib wrote.

Since the launch of the Belt and Road Initiative in 2013, it was pointed out, Pakistan has been the programme’s flagship site, with some $62 billion in projects planned in the China-Pakistan Economic Corridor (CPEC). In the process, the dispatch said, China has lent more and more money to Pakistan at a time of economic desperation there, binding the two countries ever closer, as the chill in US-Pakistan relations deepened.

The Deputy Chief of Mission at the Chinese Embassy Islamabad Lijian Zhao in a tweet to Maria Abi-Habib; the Staff correspondent at The New York Times, covering South Asia termed the article "Joke of the year," and said "It was the western countries which pushed Pakistan into that trap."

3. Western propaganda against BRI & CPEC takes an ugly turn. It is now saying there are military strings. CPEC is the flagship project of Belt & Road Initiative & purely an economic program – as its name suggests. This is beyond western thinking of unilateralism & zero sum game. https://t.co/e9X9yoMOpT

He described it as "an article full of wrong numbers and lies. CPEC loan to Pakistan is only $6 billion instead of $23 billion. It is only 6% of total debt of Pakistan of $95 billion. Is this a debt trap?"

He also rubbished the claim in the New York Times report which claimed that in Pakistan, China’s massive Belt and Road investments come with military strings attached.

Lijian Zhao said "it is in fact the defense cooperation & technology transfers, not strings."

"Strings are something like Washington Consensus that your master always pulls. BTW, [By The Way] Chinese defense cooperation with Pakistan is not new &has been there since 1950s."

He said the Western propaganda against BRI ad the CPEC has taken an ugly turn and termed it purely an economic program.

"It is now saying there are military strings. CPEC is the flagship project of Belt & Road Initiative & purely an economic program – as its name suggests. This is beyond western thinking of unilateralism & zero sum game."

Even before the revelation of the new Chinese-Pakistani military cooperation, the Times said, some of China’s biggest projects in Pakistan had clear strategic implications, citing the Chinese-built seaport and special economic zone in Gwadar that gives China a quicker route to get goods to the Arabian Sea. "But it also gives Beijing a strategic card to play against India and the United States if tensions worsen to the point of naval blockades as the two powers increasingly confront each other at sea," Correspondent ab-Habib wrote.

A less scrutinized component of Belt and Road is the central role Pakistan plays in China’s Beidou satellite navigation system, it was pointed out. Pakistan is the only other country that has been granted access to the system’s military service, allowing more precise guidance for missiles, ships and aircraft.

"The cooperation is meant to be a blueprint for Beidou’s expansion to other Belt and Road nations, however, ostensibly ending its clients’ reliance on the American military-run GPS network that Chinese officials fear is monitored and manipulated by the United States," according to the dispatch.

“The focus of Belt and Road is on roads and bridges and ports, because those are the concrete construction projects that people can easily see. But it’s the technologies of the future and technologies of future security systems that could be the biggest security threat in the Belt and Road project,” Priscilla Moriuchi, the director of strategic threat development at Recorded Future, a cyber threat intelligence monitoring company based in Massachusetts, was quoted as saying.

The tightening China-Pakistan security alliance has gained momentum on a long road to the Arabian Sea, the dispatch said.

According to the undisclosed proposal drawn up by the Pakistani Air Force and Chinese officials at the start of the year, it said, a special economic zone under CPEC would be created in Pakistan to produce a new generation of fighter jets. For the first time, navigation systems, radars and onboard weapons would be built jointly by both countries at factories in Pakistan.

The proposal, confirmed by officials at the Ministry of Planning and Development, would expand China and Pakistan’s current cooperation on the JF-17 fighter jet, which is assembled at Kamra Aeronautical Complex, giving Pakistan an alternative to the American-built F-16 fighters, according the Times.

The plans are in the final stages of approval by Prime Minister Imran Khan's government, it said.

"For China, Pakistan could become a showcase for other countries seeking to shift their militaries away from American equipment and toward Chinese arms," the report cited Western diplomats as saying, a deal which Times says could be a steppingstone to a bigger market for Chinese weapons in the Muslim world.

For years, it said, some of the most important military coordination between the two neighbours has been going on in space.

Just months before Beijing unveiled the Belt and Road project in 2013, it signed an agreement with Pakistan to build a network of satellite stations inside the country to establish the Beidou Navigation System as an alternative to the American GPS network.

Beidou quickly became a core component of Belt and Road, with the Chinese government calling the satellite network part of an “information Silk Road” in a 2015 white paper.

Like GPS, Beidou has a civilian function and a military one. If its trial with Pakistan goes well, Beijing could offer Beidou’s military service to other countries, creating a bloc of nations whose military actions would be more difficult for the United States to monitor.

By 2020, all 35 satellites for the system will be launched in collaboration with other Belt and Road countries, completing Beidou.

“Beidou, whatever any users use it for — whether it’s a civilian navigating their way to the grocery store or a government using it to coordinate their rocket launches — those are all things that China can track,” said Ms. Moriuchi, of the research group Recorded Future. “And that’s what is most striking: that this authoritarian government will be a major technology provider for numerous countries in Asia, Africa and Europe.”

For the Pentagon, China’s satellite launches are ominous.

In October, Pakistan’s Information Minister, Fawad Chaudhry, said that by 2022, Pakistan would send its own astronaut into space with China’s help.

ISLAMABAD - Pakistan will send a human to space for the first time in 2022 with China's help, Information Minister ...

“We are close to China, and we are getting closer,” he was quoted as saying in a later interview. “It’s time for the West to wake up and recognize our importance.”