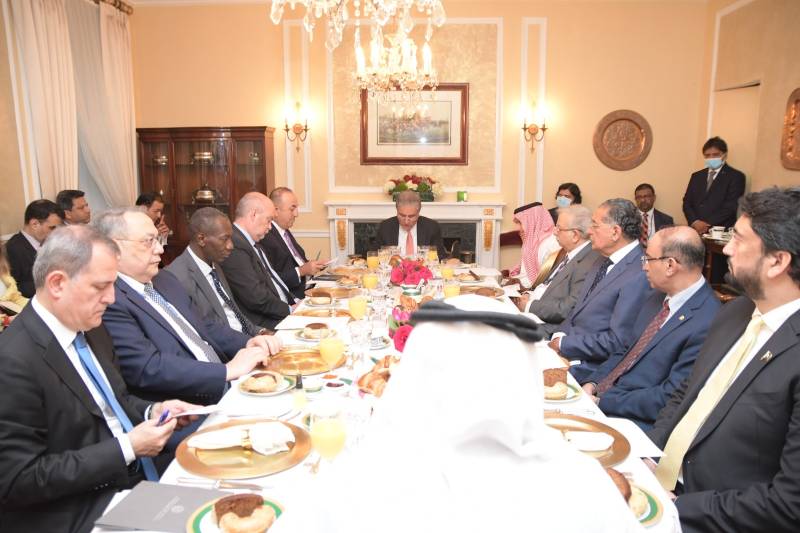 NEW YORK – Foreign Minister Shah Mahmood Qureshi Thursday called on the Organisation of Islamic Cooperation (OIC) to enhance its efforts to facilitate a lasting solution to the Jammu and Kashmir dispute.

Addressing the meeting OIC Contact Group in New York on Thursday, he said Pakistan is ready to engage with India in resolving Kashmir dispute but for that India needs to create conducive environment.

Qureshi said taht the dream of peace in South Asia cannot be realized unless the Kashmir issue is resolved fairly in accordance with the aspirations of the UN Security Council and Kashmiris.

He said Hindutva and RSS-minded BJP government of India seeks to change the demographics in Indian Illegally Occupied Jammu and Kashmir to change the special status of Kashmiris.

He said the latest example of Indian barbarism is the worst treatment of the late Kashmiri leader Syed Ali Gilani, who died on 1st of this month during a long period of Indian detention.

He said to draw the attention of the international community to the grave human rights violations in IIOJ&K, Pakistan has launched a dossier based on solid evidence.

He requested the Secretary General OIC to distribute the copies of this dossier among all members of OIUC.

Shah Mahmood Qureshi said that the Jammu and Kashmir dispute, with Palestine, is one of the two longest standing items on the UN and OIC agenda.

He said Pakistan greatly appreciates the OIC’s continued and unequivocal support on the Jammu and Kashmir dispute.

The Foreign Minister said that the OIC’s Contact Group has made invaluable contribution in galvanizing global attention to the worsening situation in IIOJK.