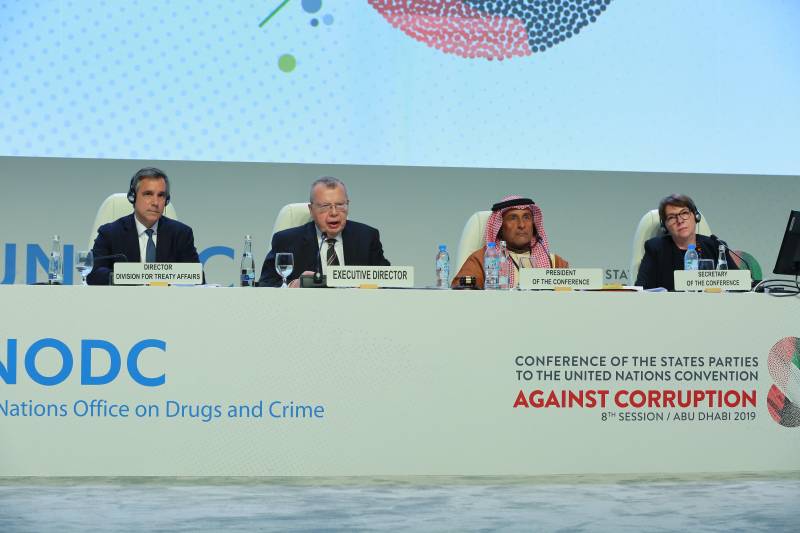 ABU DHABI – A Pakistan-sponsored resolution on strengthening the role of parliaments in preventing and combating corruption has been adopted unanimously at a UN conference in the United Arab Emirates.

A wide range of developing and developed countries from all geographical regions co-sponsored the resolution passed by the Eighth Session of the Conference of the States Parties of the UN Convention Against Corruption.

#COSP8 to the @UN Convention against Corruption #UNCAC concluded today in #AbuDhabi with 15 resolutions on strengthening prevention and the work of anti-#corruption bodies, improving data collection and more➡️ https://t.co/b3A3KpjZxo #UnitedAgainstCorruption pic.twitter.com/XAuEW5et2g

Pakistan's Foreign Office spokesperson, in a statement, said Pakistan initiative is in line with the vision of Prime Minister Imran Khan to eliminate corruption. The spokesperson added that unanimous adoption of the resolution is a manifestation of the trust reposed by the international community in Pakistan’s leading role in the fight against corruption.

The resolution calls upon the countries to enhance exchanges among parliamentary institutions for promoting good practices to strengthen the role of parliaments in their respective countries in enacting legislation and ensuring effective oversight.