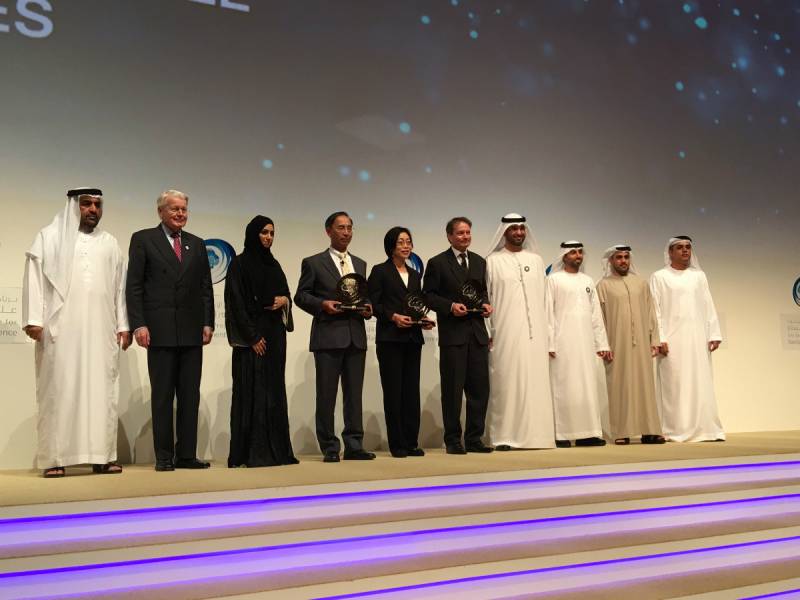 The winners of the inaugural cycle of the UAE Research Program for Rain Enhancement Science were honoured yesterday at a gala dinner held at the Emirates Palace in Abu Dhabi during the Abu Dhabi Sustainability Week 2016.

“This world-class program offers a new window of opportunity for the UAE to make a real difference in the global quest for new options and solutions to water security issues. The program will help position our nation as an international hub for advanced research and innovation in this critical area of resource optimization,” he added.

The research program chose to honour projects that offered creative and path-breaking ideas on cloud forecasting and modification, modelling and the use of advanced cloud seeding agents.

Masataka Murakami, Visiting Professor from the Institute for Space-Earth Environmental Research, Nagoya University (Japan), was awarded for his work on precipitation enhancement in arid and semi-arid regions.

Prof Murakami's project focuses on innovative algorithms and sensors dedicated to identifying the clouds most suitable for seeding. Researchers from the University of Tokyo and the Japan Meteorological Agency also contributed to this research project.

Linda Zou, Professor of Chemical and Environmental Engineering from the Masdar Institute of Science and Technology (UAE), was awarded for her work on using nanotechnology to accelerate water condensation. Through her research, Prof Zou explores the different ways of employing current knowledge of nanotechnology to develop novel cloud seeding materials and make rain droplet formation more efficient.

The UAE Research Program for Rain Enhancement Science, an initiative of the UAE Ministry for Presidential Affairs and overseen by the National Centre for Meteorology and Seismology (NCMS), offers a grant of 5 million US dollar over a three-year period to be shared by up to five winning research proposals, selected by a two-stage merit review decision process.

The program was launched at the beginning of 2015 with the aims of addressing the critical issue of water security and placing the UAE at the international forefront of scientific research into rain enhancement.

In the context of the UAE’s Innovation Strategy, the program is structured to develop human capital and stimulate investment in research in this field for the benefit of arid and semi-arid regions around the world.

Following its launch in January 2015, the program drew the participation of 325 scientists, affiliated to 151 organisations representing a diversified pool of governmental and non-governmental, private and public, domestic and foreign entities and individuals.

Registrations are currently open for the 2016 cycle at http://www.uaerep.ae.

Potential applicants are invited to participate in the grant program by submitting a letter of intent no later than February 16, 2016. Pre-proposals must be submitted by March 17, and full proposals on or before August 17, 2016.