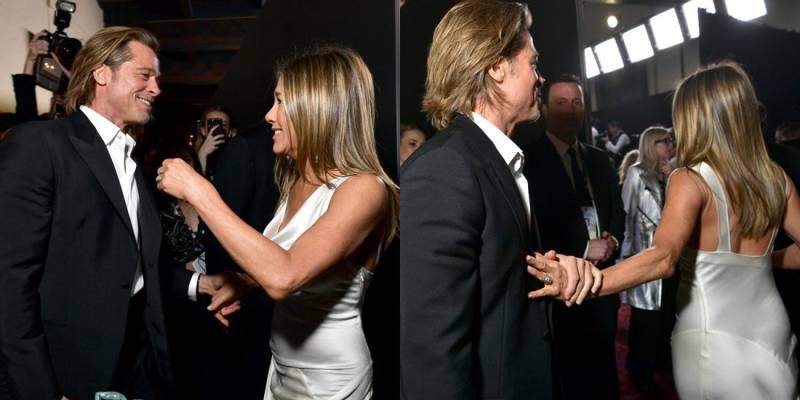 Jennifer Aniston and Brad Pitt divorced almost two decades ago, but their relationship lives on forever—in our hearts.

The two were reunited at the 2020 Screen Actors Guild (SAG) Awards ceremony on Sunday night in Los Angeles and their fans are going gaga ever since.

The former couple, who were pictured having a cozy reunion after winning awards Sunday night, both attended the Netflix party at the Sunset Tower hotel in Los Angeles. The photos quickly circulated around the internet, much to the delight of fans everywhere.

The actors, who were married for five years from 2000 to 2005, each won awards and celebrated the other’s win.

At the award ceremony, Pitt was named best supporting actor for his role in Quentin Tarantino's Once Upon a Time... in Hollywood.

His win meant he was among the first to congratulate Aniston when she bagged the best actress award in a drama series for The Morning Show shortly afterwards.

“Let’s be honest, it was a difficult part,” Pitt joked. “The guy who gets high, takes his shirt off and doesn’t get on with his wife. It’s a big stretch. Big.”

The camera cut to Aniston in the crowd, who clapped and smiled at Pitt’s joke.

Here are some Twitter responses to Jennifer Aniston and Brad Pitt's reunion at the 2020 SAG Awards.

can we have an emergency meeting about this pic.twitter.com/4ELSfWfKc4

I hope Jennifer Aniston won't get back together with Brad Pitt. He cheated on her and left her for Angelina Jolie. Jen deserves better.