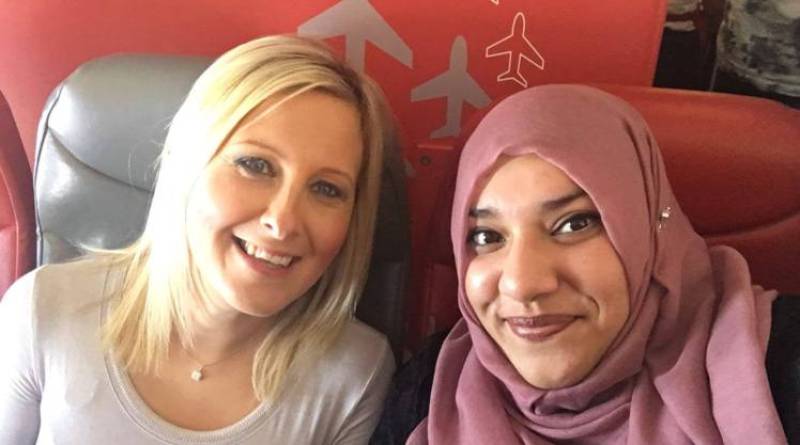 GLASGOW - Since the rise of terrorism, many Muslims around the world have been facing discrimination without having any militant links, especially while flying. Recently, a Muslim woman on board a plane in Glasgow was faced with similar suspicion; however, the tension was soon diffused, turning the incident into a heartwarming travel story.

The woman, Jiva Akbor, was reported to the air hostess by another women passenger after she sent an Arabic message to her friends -who had just been in a road accident.

Jiva sent them a message: "HasbiAllahu la ilaaha illaahu alayhi tawakaltu (may Allah make the day easy for you all)."

Seeing her message, the woman sitting next to Jiva immediately left her seat and later returned along with two air hostesses.

"I saw you write a text message and you wrote Allah on it," she said to Jiva, which left her in a shock. "I told the woman that Allah means God in Arabic and that I was a simple Muslim traveller," she wrote in Facebook status.

Meanwhile, the air hostesses offered the woman to leave the flight, however, she chose not to.

Later on, during the flight, both women sat together and had a three-hour-long conversation. Jiva explained to her that she was comforting her colleagues.

"Before too long I could see remorse in her tone, I think she was shocked at her own reaction and the realization of what she had thought of me was setting in. In her own words she said, "It’s so scary what the media can make us think" and "I just panicked," Jiva went on to say during her account.

‘Not a fixer like you’: Fahad Mustafa trolls Danish Kaneria for taking a dig at Shahid Afridi