'Your are beyond the Crown Prince,' Trump praises wealthy Mohammad Bin Salman 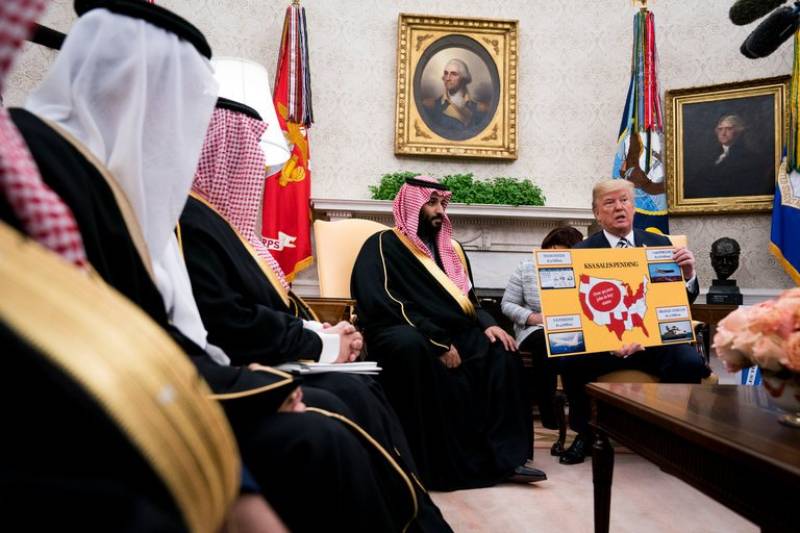 WASHINGTON - Saudi Crown Prince Mohammed bin Salman has held a meeting with US President Donald Trump during his first visit to the White House and discussed matters of security cooperation.

Welcoming the Saudi prince in the White House on Tuesday shows Trump’s support for MBS as heir of King Salman, who has introduced radical reforms in the conservative country, like empowering women, allowing cinemas, etc.

MBS had earlier visited White House last year when he was looking for the post in the court of his father. Now, he is visiting Washington after consolidating his position as heir apparent of Saudi Arabia.

Trump in his praises to MBS said, "... now you’re beyond the Crown Prince.  So I want to just congratulate you".

He added, "I thought your father made a very wise decision.  And I miss your father.  A special man.  And I know he’s coming over soon.  But we do miss him.  And that was a very incredible two days, and we appreciate the investment in our country".

Referring to Mohammad Bin Salman-led changes in the Gulf state, Trump praised the young prince in his new role.

Trump in his remarks before luncheon said, "... the relationship is probably the strongest it’s ever been.  We understand each other.  Saudi Arabia is a very wealthy nation, and they’re going to give the United States some of that wealth, hopefully, in the form of jobs, in the form of the purchase of the finest military equipment anywhere in the world.  There’s nobody even close".

During the meeting, the US president displayed charts to show the depth of Saudi purchases of US ships, missile defence, planes and fighting vehicles.

He said, "As I said before, when it comes to the missiles and the planes and all of the military equipment, there’s nobody that even comes close to us in terms of technology and the quality of the equipment.  And Saudi Arabia appreciates that.  They’ve done tests of everything, and they appreciate it, and they understand it very well, probably better than most".

In response, the Saudi crown prince said: "We believe the same.  I do believe that the opportunities, it’s been huge.  And we are trying also to tackle new opportunities to prepare the visit of His Majesty as soon as possible, with the new waves of opportunities in the different area.  And we believe we can do all the great things together".

During the meeting, a senior administration official said, the two leaders took up an array of thorny issues: Mr. Trump’s coming decision on whether to rip up the Iran nuclear deal; Saudi Arabia’s bitter dispute with its neighbor, Qatar; and the brutal civil war in Yemen, which has led lawmakers to propose a cutoff in American support for a Saudi-led bombing campaign that has killed thousands, New York Times reported.

Trump, the official said, urged Prince Mohammed to settle the festering battle that pits Saudi Arabia and the United Arab Emirates against Qatar.