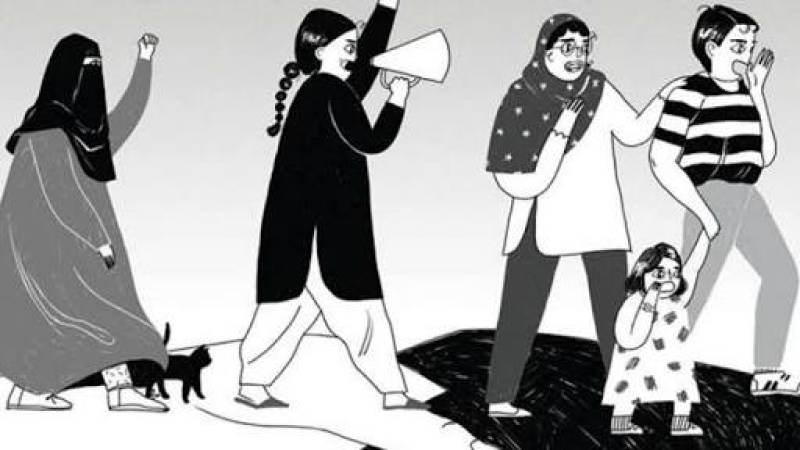 PESHAWAR - The Khyber Pakhtunkhwa Assembly on Wednesday (yesterday) had held a protest in the reaction of the Aurat March, which was held across Pakistani cities on March 8.

The resolution, presented by Rehana Ismail of the Muttahida Majlis-i-Amal (MMA), claimed that women had taken part in the march holding placards and raising slogans that were "obscene".

"Some hidden forces have sped up their efforts to destroy our family system and social customs, the practical demonstration of which took place on March 8, 2019, in various big cities on Women's Day," the resolution demanded. It said the demands made at the event for women empowerment were "shameful and un-Islamic".

LAHORE - Kishwar Naheed is no new name to Pakistan. She is one of the first few women that come to mind when we speak ...

The document read as the provincial assembly supports the rights granted to women and minorities by Islam, the "obscenity" witnessed on March 8 was not acceptable to it.

It asked the KP government to request the federal government to "expose" such forces and their "conspiracies" and prepare a strategy to deal with such incidences in the future.

The resolution in its original form was opposed by MPAs of the ruling Pakistan Tehreek-i-Insaf (PTI), but after some redaction and negotiations, they agreed to unanimously pass the measure.

KARACHI-The Aurat March 2019 is set to take place in all major cities of Pakistan today (Friday) to correlate with and ...

Addressing during the season the PTI MPA Ayesha Bano shared that they supported organisations that speak for women's rights, however, "We do not accept any demands of women which are against Islam."

Opposition leader Akram Khan Durrani, who also belongs to MMA, recalled that a banner at the Aurat March had read "Apna moza khud dhundo (find your own sock)" and said: "If I have pain in my back and my wife helps me put on a sock, what is wrong in that?"

PML-N's parliamentary leader in the KP Assembly, Sardar Muhammad Yousaf Zaman, claimed that certain NGOs were working against Islamic injunctions and the Constitution. "Shamelessness is being spread in the name of 'change'," he stated.

LAHORE - Pakistani actor Ahmed Ali Butt has is being highly criticized by social media users after he had shared his ...

Women in large numbers, as well as men, had participated in the Aurat March held across the country to mark International Women’s Day on March 8. The first such march took place in Karachi in 2018; this year, the rally was extended to more cities including Lahore, Multan, Faisalabad, Larkana and Hyderabad.