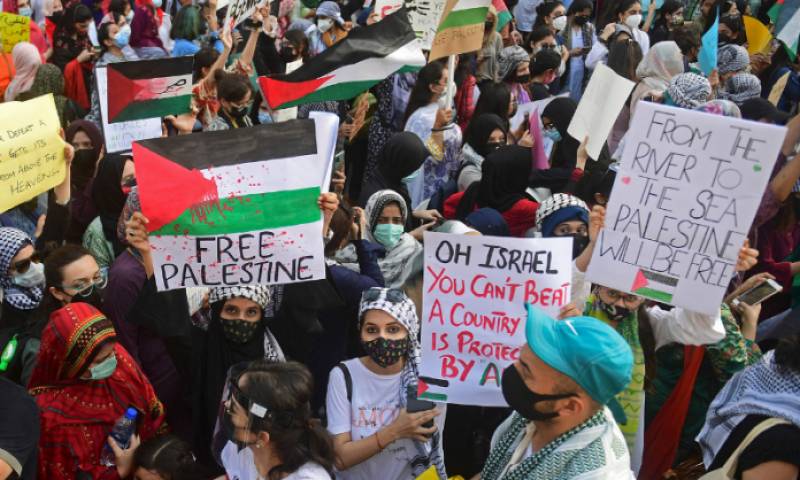 ISLAMABAD – Pakistan observed Friday as Palestine Day to show solidarity with the people of Palestine who have been facing a massacre at the hands of Israeli occupation forces for the past 11 days.

Rallies, protests and seminars are organised across the country to express solidarity with the Palestinians.

Israel has been pounding Gaza with air strikes for 11 days, killing nearly 250 men, women and children after the hostilities flared up following Sheikh Jarrah evictions and Israeli police's brutality at the Al-Aqsa mosque.

Pakistan raised its voice against the Israeli aggression at the United Nations, with Foreign Minister Shah Mahmood Qureshi saying that voice of the Palestinians could not be suppressed.

National Security Adviser Dr Moeed Yusuf also did the same in a tweet.

Pakistan 🇵🇰 stands in solidarity with Palestinians 🇵🇸 in their struggle for freedom from occupation. There can be no lasting peace without an independent and contigous Palestinian State with Al-Quds as its capital. Our policy on 🇵🇸 is guided by the vision of Quaid-e-Azam.

Earlier, Prime Minister Imran Khan had directed the officials to make preparations for the state-level protests against the Israeli atrocities in Palestine on Friday.

The PM had issued the orders during a meeting he chaired of government spokespersons. The aides of the PM had advised him to hold such a demonstration on Friday.

NEW YORK: Pakistan on Friday welcomed the announcement of a ceasefire between Israel and Hamas after 11 days of deadly ...

Speaking on the occasion, National Security Adviser Moeed Yousuf said Pakistan stands by the people of Palestine and there would be no lasting peace without an independent Palestinian state.

PML-N President Shehbaz Sharif and former prime minister Raja Pervez Ashraf of the PPP also expressed solidarity with the people of Palestine as they visited the United Nations office in Islamabad.