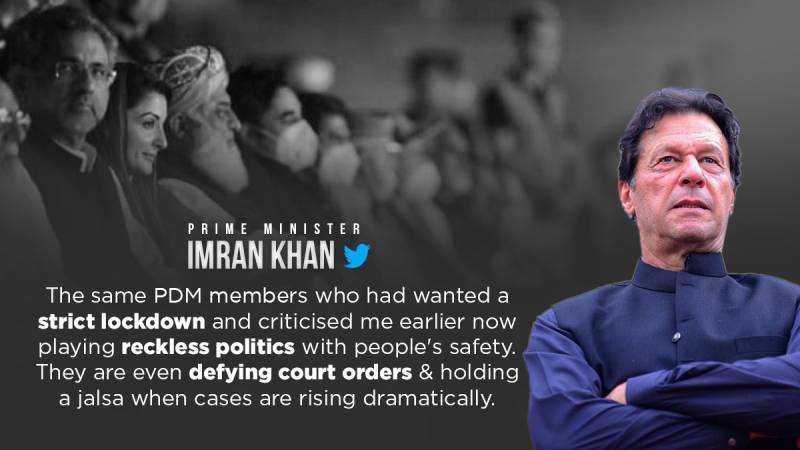 Premier while re-tweeting a tweet of Federal Minister for Planning and Development Asad Umar, said "the same PDM members who had wanted a strict lockdown and criticized me earlier now playing reckless politics with people’s safety. They are even defying court orders and holding a jalsa when cases are rising dramatically."

The same PDM mbrs who had wanted a strict lockdown and criticised me earlier now playing reckless politics with people's safety. They are even defying court orders & holding a jalsa when cases are rising dramatically. https://t.co/nc9KAN0Ihg

The PTI leader took to Twitter on Saturday and said in a series of tweets that Pakistan Muslim League-Nawaz (PML-N) imposed complete lockdown in Azad Kashmir for two weeks and Pakistan People’s Party (PPP) government-enforced smart lockdown in four districts of Karachi.

Asad Umar, who also heads the National Command and Operation Center (NCOC), said both parties are insisting to hold a public gathering in Peshawar and one cannot find a clearer example of double standards than this.

Asad Umar remarked that the opposition will gain nothing except endangering the lives and livelihood of people. Perhaps, it wants to take revenge from the people of Peshawar, he said.