Together for Peace: WCR conference exposes 'conspiracy of extremism' ahead of Muharram 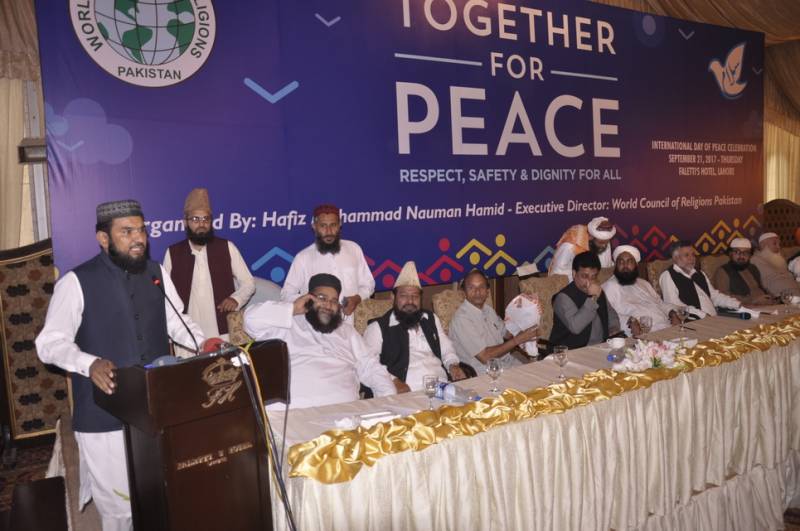 LAHORE - Hundreds of scholars and people from all walks of life gathered Thursday in Punjab's capital city to mark International Peace Day just ahead of the Islamic month of Muharram-ul-Haram.

Besides minority leaders, journalists, students and academics, over 300 scholars graced a conference ‘Together for Peace’ organised by the World Council of Religions-Pakistan (WCR). A unanimous declaration was presented at the end of the conference where peace awards were also distributed among selected persons.

Addressing the conference, Ashrafi called for cooperation to bring enduring peace to country, saying no religion allows extremism and violence.

Praising the efforts of minorities in Pakistan for upholding sanctity of Islamic beliefs, the PUC chairman said Pakistan is for all and it is our mutual responsibility to protect every religious minority in the country.

He urged the government to ensure peace in the holy month, which starts from tonight (Thursday) while stressing respect for everyone’s faith.

Khalil Tahir Sindhu said that every human deserved to be paid respect beyond his religion. He termed religious extremism 'a conspiracy aimed at fanning bigotry to damage national integrity and stability'.

Ilyas Ghuman, sharing his view, termed peace and unity vital for development in Pakistan. He called upon the participants to play their role for reconciliation and raise awareness among their respective groups to downgrade the menace of extremism.

WCR Executive Director Hafiz Muhammad Noman said that the organisation, which started efforts for peace in 2004 is representative of all religions and sects of country.

He stressed the need to beat the elements of chaos, and ending prejudice. Noman added people will be enthusiastic to make efforts to put the country on track if there is peace.

He also urged the media to join the efforts, initiated by WCP, for bringing peace to the country.