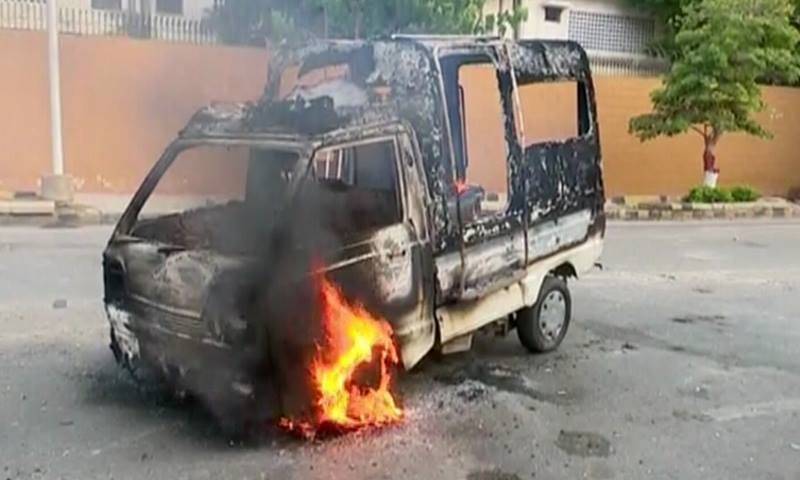 KARACHI (Web Desk) - Following the attack on TV stations in Karachi by Muttahida Qaumi Movement (MQM) workers, the party has come under severe criticism once again.

According to a video available at private news channels, the party workers asked the party chief Altaf Hussain for the permission to encircle and assault the media outlets and he replied in affirmative.

MQM chief Altaf Hussain, as it can be seen in the video, incited the party workers to attack the media houses' offices.

"Bhai, we are ready and waiting for your command," a female MQM worker can be heard asking Altaf Hussain.

"Bismillah! Bismillah!" MQM chief Altaf Hussain can be heard responding, with workers getting up to follow his orders.

"Okay, bhai. We were only waiting for your orders. We are getting up now," the female worker can be heard saying with others getting up.

At least one person has reportedly been killed in the violence that ensured after the MQM chief's live telephonic speech to party workers outside the Press Club.

The workers turned to violence, pelting stones and damaging cars and shops at Zainab Market area. Aerial firing was also reported from the area.

Prime Minister Nawaz Sharif has condemned the violence in the city, with DG Rangers Maj-Gen Bilal Akbar ordering strict and swift action against the attackers.

“Nobody would be allowed to disrupt the peace of the city," said the DG Rangers, according to a press release from the paramilitary law enforcement force.

"We are closely monitoring the situation. Those who carried out the attack will be made to pay for every second," said Maj-Gen Bilal Akbar in his statement.

"Those who take the law into their hands will not be spared," he said.

In the past, MQM chief Altaf Hussain stirred controversies many times by apparently inciting workers to violence and anti-state activities. Broadcast of images and speeches of  Altaf Hussain across all electronic and print media was also banned by Lahore High Court.

Altaf Hussain is a curse on #Pakistan. Shame on him & all those who defend this speech.#MQM