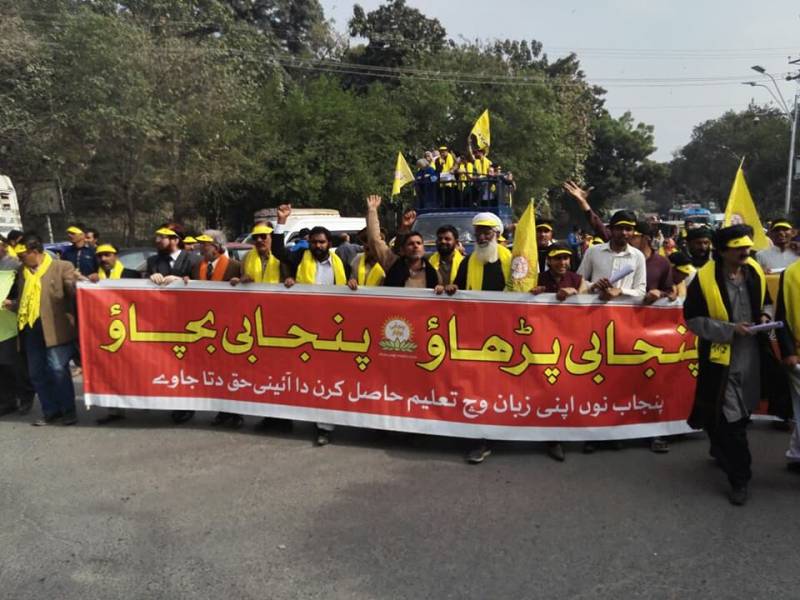 LAHORE - Like other parts of the world, Pakistan marked the International Mother Language Day on Wednesday to promote awareness of linguistic, multilingualism and cultural diversity.

The members of Punjabi Parchar, Punjabi Adbi Board, and other organisations took out a rally from Punjab Assembly to Lahore Press Club. Joined by activists, students, teachers and a large number of civil society members in Punjab, they demanded the constitutional right of education in their mother language – Punjabi.

Article 251 of the constitution of Islamic Republic of Pakistan binds the provinces to adopt necessary measures for promotion, teaching, and usage of regional languages.

With placards and banners in their hands, the demonstrators were demanding Punjabi as a compulsory subject from primary to graduation level.

Mother Language Day was first announced by UNESCO on November 17, 1999, and is an annual event since then. The date represents the day, 21st February 1952, when four young students were killed in Dhaka, the capital of Bangladesh, because of Bengali and Urdu language controversy.

To foster sustainable development, learners must have access to education in their mother tongue and in other languages.

It is through the mastery of the first language or mother tongue that the basic skills of reading, writing,, and numeracy are acquired.

On 16 May 2007, the United Nations General Assembly, in its resolution, called upon state members to promote the preservation and protection of all languages used by the world's population. By the same resolution, the general assembly proclaimed 2008 as 'International Year of Languages', to promote unity in diversity and international understanding, through multilingualism and multiculturalism.

“The mother tongue holds an important role in basic education, as it provides better learning to children. This is why the Punjab government must provide to all the children the right to learn in their mother tongue – which is also stressed by UNESCO,” Ahmad Raza, president Punjabi Parchar, said while addressing the rally’s participants.

“After the 18th amendment it is now the responsibility of the provinces to implement this right but Punjab has been committing sheer violation despite repeated requests made to the government.”

He added: “The Constitution of Pakistan has given right to people to learn from their primary schooling in their mother language. But the government has not adopted any measure to teach Punjabi in the schools.

“The right of education in the regional languages has been given to other provinces but in Punjab such a right is still denied by Punjab government.

“This is the core reason the government is still unable to increase the literacy rate in the province,” he pointed out.

The Punjabi language can also play a vital role in promoting the Sufi teachings in the province, Raza further said.

Punjab Adbi Board president Mushtaq Sufi said the Punjab government “is deliberately making the children of Punjab ignorant through banning the education in their mother language”.

“Every year, we come here to remind the government that Punjab has its own language which has not been given its due respect,” Sufi said while urging the government to adopt Punjabi as compulsory subject from Primary to Graduation level.

Shehzad Ammar, a Denmark-based IT expert who participated in the rally, highlighted that all the province other than Punjab are promoting local languages at school and higher levels. He urged Punjab Chief Minister Shehbaz Sharif to immediately enforce adoption of Punjabi in the educational institutions.

Languages are the most powerful instruments of preserving and developing our tangible and intangible heritage. All moves to promote the dissemination of mother tongues will serve not only to encourage linguistic diversity and multilingual education but also to develop awareness of linguistic and cultural traditions throughout the world while inspiring solidarity based on understanding, tolerance and dialogue.