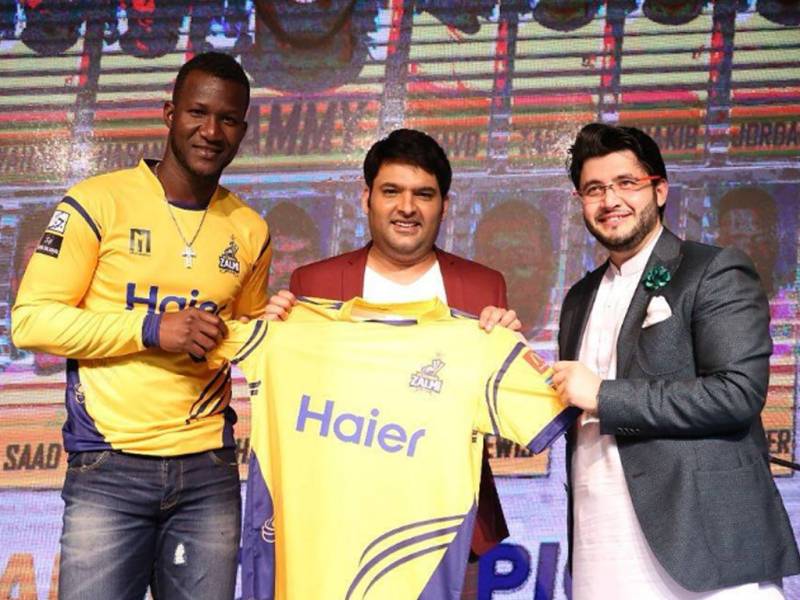 DUBAI - Indian comedian Kapil Sharma entertained the Peshawar Zalmi players with his stock of jokes ahead of the third edition of Pakistan Super League (PSL) in UAE on Wednesday.

﻿LAHORE - The third edition of the Pakistan Super League 2018 is all set to kick off in Dubai as the first match ...

When Sharma asked Zalmi skipper Sammy, "Why do people call you Khan?" the former Windies captain replied, "It's because of Afridi. And also, maybe, because I'm from Peshawar."

The comedian also joked with Akmal and Hafeez about lifestyles in the subcontinent. “You are three brothers; [with] one cousin playing top-level cricket - and you all have kids - it means Pakistan doesn’t need any other family in cricket,” he teased, making everyone cheer for the Akmals.

Javed Afridi - the owner of the PSL defending champions - said he wanted to make his players feel relaxed before the start of the action-packed cricketing tournament.

“Kapil Sharma is the best comedian in our region these days and the players had a great time,” Afridi added.

Children from the Shaukat Khanum Memorial Cancer Hospital were also invited to the show by the Zalmi management, and, according to Afridi, this was a part of his mission of “spreading smiles”.

Lovely to have kids from @SKMCH interacting and spending quality time with their favourite Peshawar Zalmi stars they are growing up watching on television. It is always a moment of great pleasure to be the reason of these brave kids wearing smiles on their faces. #HumZalmi pic.twitter.com/LZ46bJk4Of

“We have got these kids to enjoy PSL matches and [spending] time with Kapil Sharma was another step in bringing change in their lives,” he said.

The third edition of the PSL will kick-off today with Zalmi taking on the newcomers Multan Sultans in the opening game of the tournament at Dubai Cricket Stadium.