Afghan brothers invent drone that destroys explosives, instead of dropping them 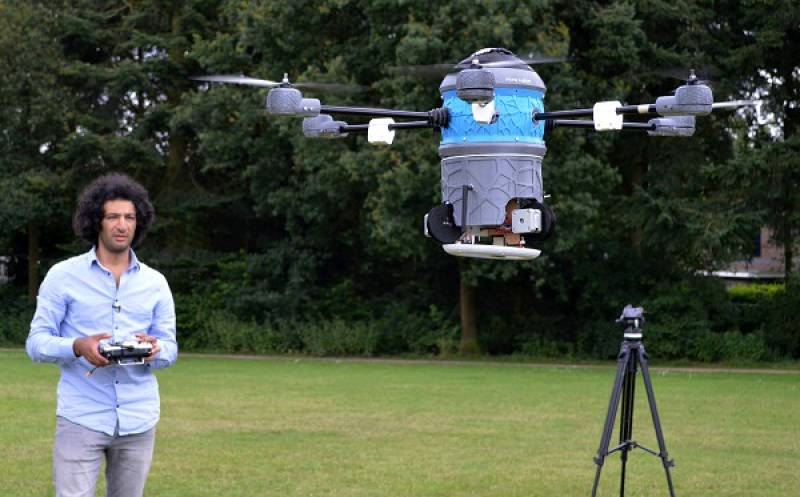 EINDHOVEN: Innovative Afghan brothers, Massoud and Mahmud Hassani, are back with their latest creation: a low-cost drone that can help detect and destroy mines, which each year claim thousands of lives around the world.

Hinged on six arms with rotors that create lift, the 4.5 kilo (10-pound) drone consists of a blue hard plastic casing with batteries, computer hardware and software and a global positioning system.

A robotic arm slung underneath is fitted with pincers that can remotely be opened and closed. The pincers can carry a metal detector or a small explosive charge, which the brothers say can be used to destroy a landmine.

The on-board GPS allows it to plot its course using a computer.

Massoud explains that the drone works in three stages: mapping, detecting and destroying.

When deployed, a 3D mapping system scans the section that needs to be de-mined. Secondly, the mapped area is meticulously swept by the drones carrying a metal detector on a pre-programmed path.

Finally, the plan is to destroy the mines by using the drone to place a small charge on every mine to detonate it.

“This way the mine field in question can be scanned inch-by-inch,” Massoud told AFP at his workshop in the southern Dutch city of Eindhoven.

“We believe this way mines can be cleared almost 20 times faster than what they are now,” Massoud said.

Three years ago, former refugees Massoud and Mahmud stunned the world with another min-detecting invention that looked like a dandelion puffball.