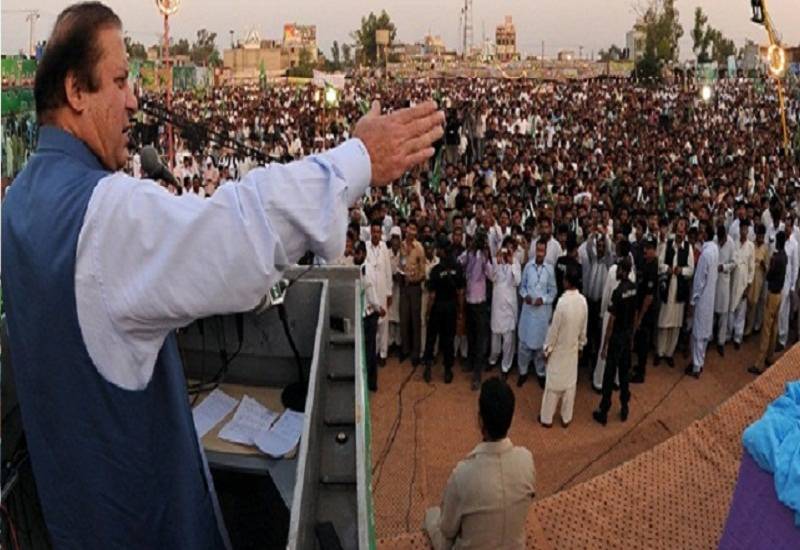 MUZAFFARABAD - Prime Minister Muhammad Nawaz Sharif on Friday vowed to bring about a revolution in the development of Azad Jammu and Kashmir, an autonomous region in Pakistan where his party, the PML-N, will form government after winning a simple majority in the 2016 AJK Legislative Assembly elections.

Addressing a public gathering at University Ground, the prime minister thanked the Kashmiri people for supporting the party in winning 32 out of 41 Legislative Assembly seats and appreciated their rejection of what he called the culture of negative politics.

The prime minister had earlier arrived in Islamabad only a day after arriving in Islamabad from London, where he had a prolonged stay recovering from open heart surgery.

A true Pakistani. A true Kashmiri.

Nawaz Sharif also said that the Kashmiri people had defeated the mainstream leaders of opposition parties, in a veiled reference to the defeat of Pakistan Tehreek-e-Insaf’s Barrister Sultan by his party’s Chaudhry Saeed.

He also scoffed at the much-hyped mass movement announced by the PTI against his government, implying that the size of the movement would be as large as the PTI's two-seat share in the AJK assembly.

The premier assured the charged gathering that the next five years would be exemplary for the development of AJK.

The PML-N will develop a network of motorways and highways besides spending huge amounts on education and health sectors, he vowed.

He added that the opposition parties had criticized him during the election campaign, but said that he had not responded to anyone.