Dinner hosted in honor of Pakistan cricket team in Manchester 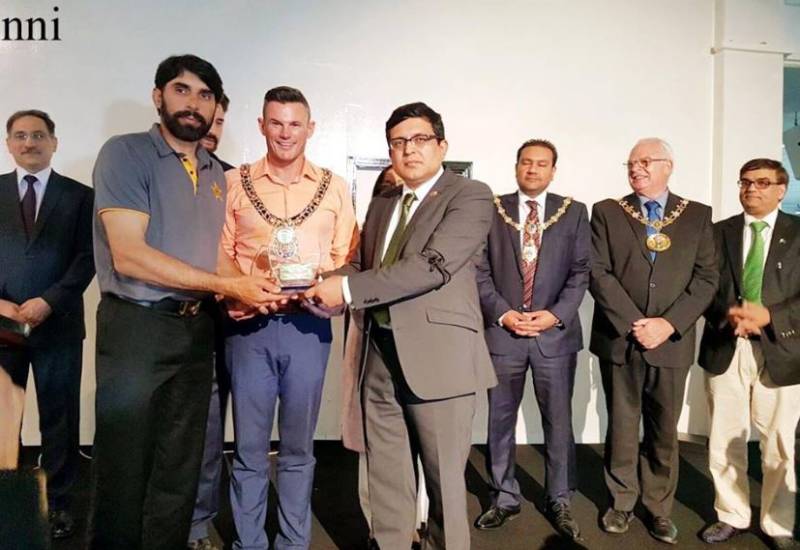 ISLAMABAD: The Consulate General of Pakistan in Manchester and the Pakistani community on thursday hosted a reception dinner in honor of the visiting Pakistani cricket team in the city before the team's second Test match at Old Trafford against England in the Investec Series.

Welcoming the team, Consul General, Zahoor Ahmed called them the national heroes of Pakistan and appreciated the superb performance of the team at Lord's which had made every Pakistani proud.

He said that the Pakistani cricket team had shown true team spirit and through their excellence in sports had added to the positive image of the country. Our cricket players have shown a great deal of discipline and sportsmanship and are role models for the youth, he added.

The consul general congratulated the team on behalf of the Consulate and the Pakistani community on their historic performance at Lord’s and wished them best of luck for the upcoming matches.

He also presented a memento shield to the cricket team, which was received by Captain Misbah Ul Haq.

A short film on the annual Pakistan parade in Manchester and a documentary on the history of cricket in Pakistan was also screened at the reception.

Speaking on the occasion, the Lord Mayor of Manchester appreciated the contribution of the British-Pakistani community to the United Kingdom.

He said that cricket was an important link between the two countries and the Pakistani cricket team’s visit to Manchester would further strengthen these linkages.

Speaking on behalf of the team, the Manager of the Pakistani cricket team, Intekhab Alam highlighted the absence of international cricket from Pakistan and said that it was high time that international teams should visit the country as it had become safe for cricket after achieving great success in the war against terror.

The community was very excited to meet their national heroes and made the most of the opportunity by taking photographs and autographs with their favorite players.

On behalf of the British Pakistani community, leading businessmen in attendance announced a cash prize of £10,000 for players bagging five wickets or making 100 runs at the Old Trafford Test Match.