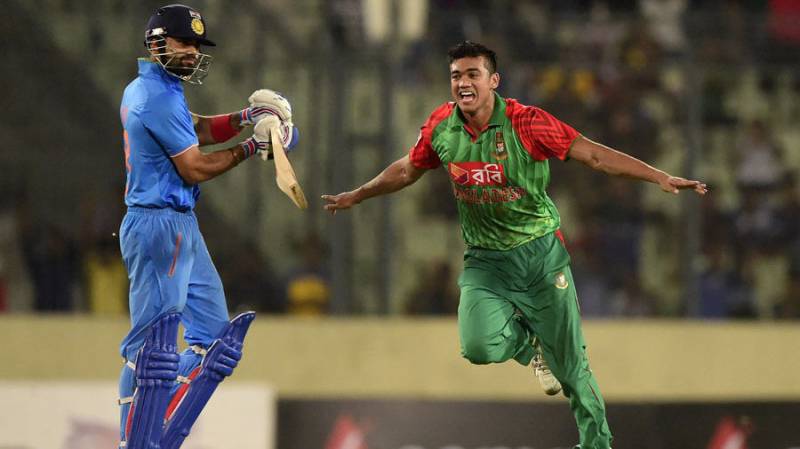 Mustafizur had wrecked the Indian innings with a superb spell of 6 for 43 - second best figures by a Bangladesh bowler in ODIs - to set the stage for one of greatest wins in their cricket history.

The victory has given them an unassailable 2-0 lead with a match to spare, after Thursday’s 79-run victory, which also came on the back of a superb 5 for 50 debut spell from the 19-year old.

He again tore through the much-vaunted India batting line-up to become the first player to pick up 11 wickets in his first two ODIs.

This ODI series win against India follows the ones against Pakistan and Zimbabwe. The Tigers have now won 10 ODI ties in a row and four of their last six ODI series at home. 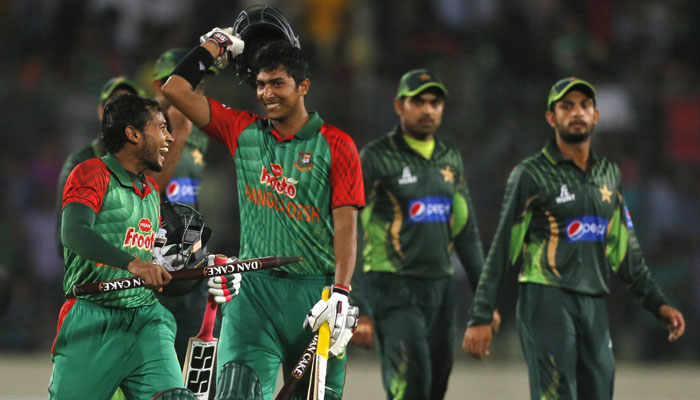 Mustafizur left India batsmen clueless as Bangladesh skittled out the tourists for a meagre 200 in 45 overs in the rain-shortened game at the Sher-e-Bangla National Cricket Stadium in Mirpur.

The hosts were given a revised target of 200 in 47 overs after the Duckworth-Lewis method had been enforced.

Opener Tamim Iqbal (13) survived dangerously when a catch by Virat Kohli at extra cover off debutant seamer Dhawal Kulkarni was disallowed. But he went playing a similar shot soon after with Bangladesh at 34.

Newcomer Liton Kumar Das and Soumya Sarkar rotated the strike but did not spare loose deliveries, heaving an occasional six and scoring boundaries all round the wicket.

The two put on 52 runs for the second wicket before Soumya (34) was foxed by a Ravichandran Ashwin arm ball that kept low and skidded to trap him lbw.

After going for 20 runs in his first two overs, Patel foxed Liton (36) with a flighted delivery that picked the edge all the way to skipper Mahendra Singh Dhoni’s gloves.

Veterans Shakib Al Hassan and Mushfiqur Rahim weathered some brilliant Indian spin bowling with a mix of occasional aggression and nudges for ones and twos. 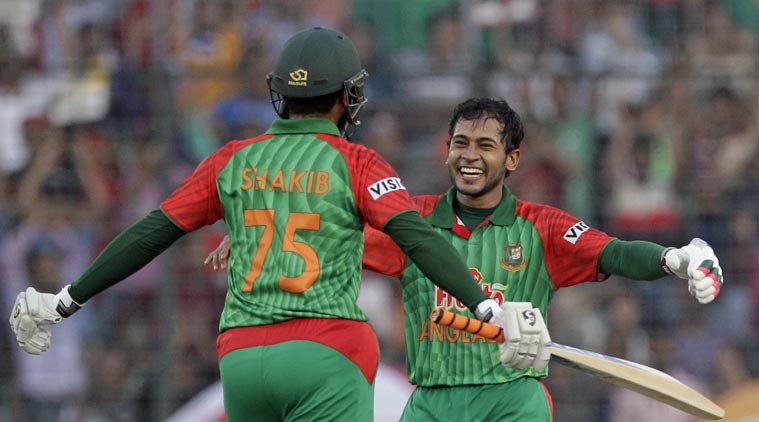 But just when they seemed to be taking Bangladesh towards a facile win, Mushfiq (31) went against the run of play, beaten by a direct hit from the deep by Rohit Sharma. His 54-run stand with Shakib had taken Bangladesh close enough to victory.

Thereafter, Sabbir Rahman (22) joined Shakib whose 51 in 62 balls could not have been more timely. With eight boundaries between them, the duo took the hosts to the historic win with nine overs remaining.

Earlier, Bangladesh bowled brilliantly to contain the number 2 ODI side to a meagre 200.

Like he did 48 hours ago, Mustafizur pulverised the Indian batting to return a superb 6 for 43 and was adjudged Man-of-Match for the second time in a row.

The left-arm seamer drew the first blood, sending back opener Rohit Sharma for a duck in the second ball of the match. He again failed to pick up the slower and was caught at point.

He then ripped through the middle order just when skipper Dhoni (47) and Suresh Raina (34) had looked like making a slow recovery.

He first had Raina caught behind by Liton off a rising delivery outside the off stump.

Soon after, his well concealed slower one foxed Dhoni into playing early and the attempted cover driver ballooned up to Soumya at mid-off for an easy catch. 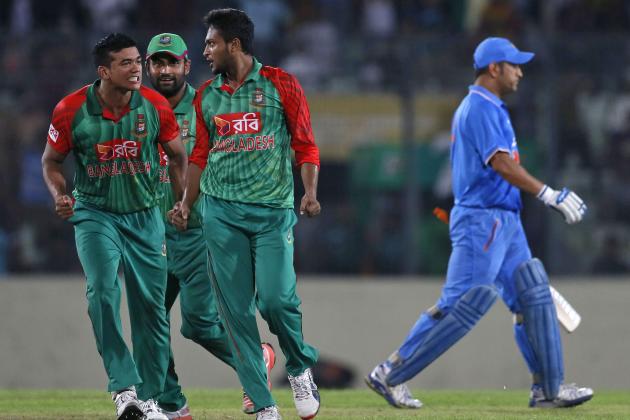 In the very next ball, the new pace find trapped Axar Patel lbw with a dipping in-swinger as India lost three wickets for 17 runs in a decisive batting powerplay.

Though denied the hat-trick by a watchful Ashwin, he struck soon after removing the lanky Indian spinner, trapping him lbw.

In the last ball of his allotted ten overs, immediately after resumption of play following rain, Mustafizur bowled Jadeja (11) with a beautiful dipping inswinger.

He varied his pace, line and length to have the Indians guessing all the while in his second spell after his first five overs had cost him 32 runs.

The linchpin of the attack was superbly supported both by his seam bowling partners and spinners.

Off-spinner Nasir Hossain struck twice in quick succession, removing the dangerous Kohli (23) and Shikhar Dhawan (53) after the two had put on a fighting 74-run second wicket stand to bring India back into the game for a while. 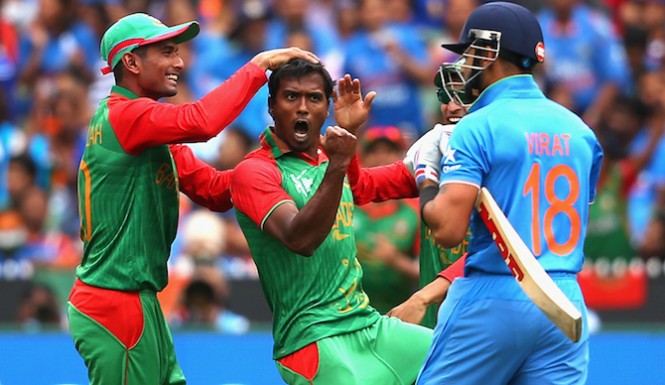 Kohli was trapped lbw playing across to one that straightened as he played for the turn. Dhawan was beaten in flight and edged to be caught behind by Liton.

Paceman Rubel Hossain had newcomer Ambati Rayadu caught by Nasir at gully for a duck to leave India precariously perched at 110 for 4.

He finished the Indian innings removing Bhuvneshwar Kumar caught behind to finish with 2 for 26.

Unlike the long qualifying rounds for the World Cup, the qualification for the Champions Trophy is rather straight forward. The top 8 teams in the Reliance ICC ODI Rankings as of on 30 September 2015 will qualify for the tournament to be held in 2017 in England.