GAME ON HAI: Int'l Cricket returns to Pakistan after 2271 days 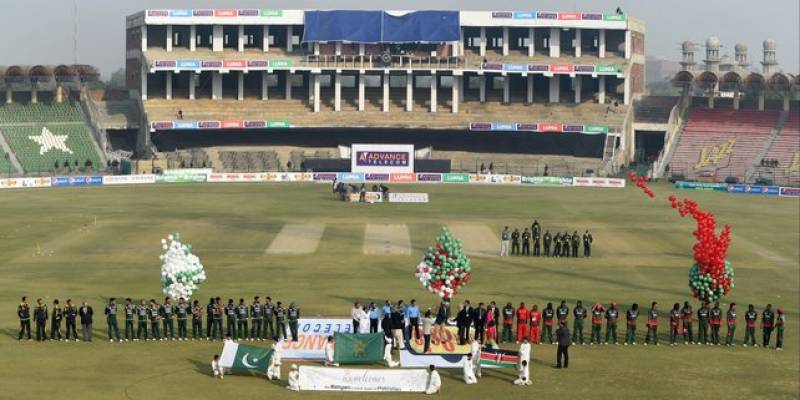 LAHORE (Ali Zain) – Pakistan is going to host the Zimbabwe cricket team on its home ground after an unannounced pause of six years, two months and nineteen days (2271 days), since Sri Lanka cricket team came under attack near Lahore’s Gaddafi Stadium on March 3, 2009.

Following the tragedy all cricket playing nations refused to send their teams to play inside Pakistan and as a result the country had to play all of his home series in Dubai for six long years whereas many of the scheduled tours were canceled.

This was the time when great cricketing nation, who won the cricket world cup in 1992 and T20 mega event in 2009, was deprived of international cricket. Although Pakistani security agencies had arrested all those involved in attacking Sri Lankan team still the shadows of any possible act of terrorism remained dominant over Pakistani grounds. In the year 2011 Pakistan was not allowed to co-host the ICC Cricket World Cup as well, contrary to the prior scheduled program. As a result the matches that were scheduled to be played in Pakistan were also moved to India and Bangladesh.

Afterwards Pakistan Cricket Board convinced Sri Lanka Cricket Board and Bangladesh Cricket to send their teams but the tours mostly remained on papers. As a result many of the players currently playing Pakistan cricket team have not played a single match on home grounds. Misbah-ul-Haq happened to be the most unfortunate Pakistani skipper who never led his team at home. And all this continued until Zimbabwe team landed in Pakistan on May 19.

Pakistan President Mamnoon Hussain will be the chief guest at Gaddafi Stadium to witness the first T20 match between Pakistan and Zimbabwe. Meanwhile Pakistani cricket fans are also all set to make these historical moments memorable. All of the tickets were sold out one day before the first T20 match. Moreover #RevivalOfIntCricket (Revival of International Cricket) remained the top trending topic on social media network Twitter in Pakistan. Cricket fans not only thanked the Zimbabwe cricket team for visiting Pakistan but they termed it Pakistan’s victory against terrorism also.

Generous Pakistani fans, who announced to cheer the Zimbabwe cricket team as well, appeared to be unconcerned of match results.

What an atmosphere it ll b in Lahore People ll b excited, shouting, dancing, enjoying n the best thing 2 hear will b #PakistanZindabad

great to have #RevivalOfIntCricket in Pak. best of luck today greens...wish i could have been in the stadium today

The ae o ae o aaa moment returns in Pakistan. wish I cud be there to support the game and peace. #karachi needs cricket #RevivalOfIntCricket — AmBreeN Mustafa (@AmBieMZ) May 22, 2015

Thank u team Zimbabwe! Thank u so much for coming n #RevivalOfIntCricket in our country. pic.twitter.com/QAhwTEc5jU

youngsters got a chance to perform at home groud 1st ime bcoz of #RevivalOfIntCricket #goodluck — Huma dar (@ZHDar2) May 22, 2015

23rd March parade & now international cricket is restored in Pak,Salute to Pakarmy without them peace was not possible #RevivalOfIntCricket — Ahmad Ali (@ahmadali300) May 22, 2015