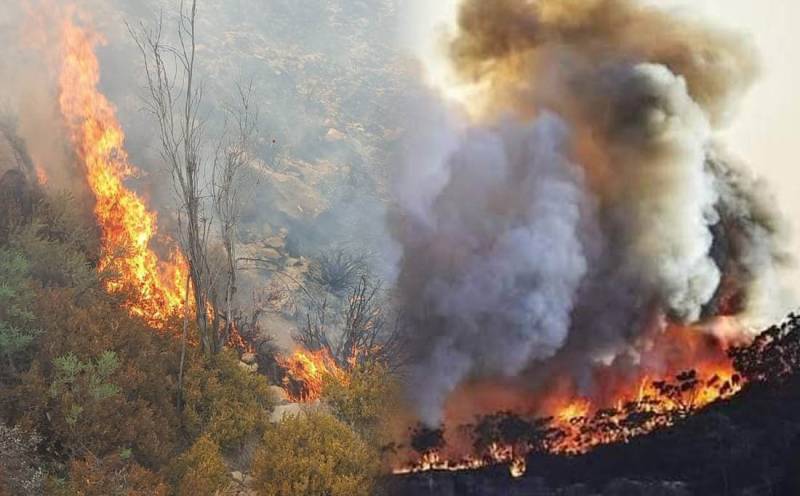 PESHAWAR – In the wake of a massive forest fire in the Koh-e-Suleman mountain range, the Khyber-Pakhtunkhwa (K-P) government declared an emergency on Sunday.

Minister for Local Government Faisal Amin Khan told media outlets that at least three people have died and four others were injured after being trapped in the huge inferno that started around ten days ago at the confluence of Khyber Pakhtunkhwa and Balochistan and erstwhile Fata.

Armed forces personnel, rescue organisations, and local residents were working to douse the flames on the Balochistan side while teams and machinery on the K-P side were simultaneously also working to create access to the terrain, Khan said.

He however cited issues like lack of water supply at the site and steep cliffs that make firefighting extremely difficult.

3 people were burnt to death and 4 injured while battling the violent fire at Koh-e-Sulaiman mountain range in #Balochistan. Both the KP and Balochistan forest department officials miserably failed to control the fire. Army help sought to put out wildfire in Koh-e-Suleman range. pic.twitter.com/Gjmf5flT1i

Minister maintained that pine and olive trees over 400 acres on the northwestern side have been affected as the strong winds are enhancing the intensity of the blaze.

The provincial chief secretary of Balochistan has established a task force, led by Secretary Forest, to implement rescue and relief operations of extinguishing the fire on the pine trees in the Sherani district. The task force was formed to assess damages, and the loss of human lives and submit reports on a daily basis.

Some reports suggest that the wildfire was allegedly started by arsonists at the behest of the timber mafia.

QUETTA – The Pakistan Army has launched an emergency mission after three people were burnt to death and several ...

The Koh-e-Suleman range is home to the world’s largest pine nuts, it spreads over an area of more than 26,000 hectares and produces 640,000kg of top-quality pine nuts annually. Thousands of growers have lost their only source of income in the uncontrolled fire.